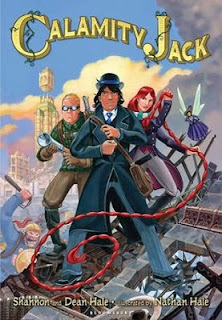 This sequel to Rapunzel's Revenge focuses on her accomplice, the titular Calamity Jack. Just as that book recast classic fairy tale stories into a different, Southwestern flavored mold, this one makes Jack into a young Native American who is prone to chicanery: 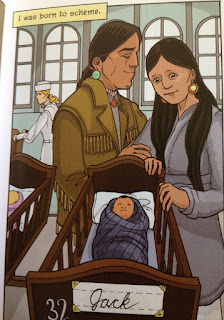 Because of the urban setting, a lot of this story has more of a steampunk feel to it, with crazy inventions and imaginative urban structures. Jack and his family live in a city where they own a bakery. One of their clients is named Blunderboar, a large, imposing, and rich figure who lives in a high-rise building: 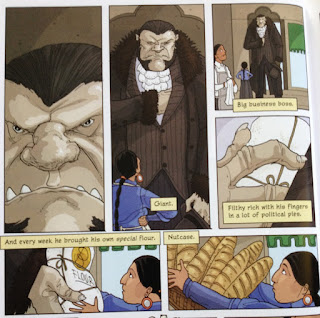 Eventually, Jack embarks on a bunch of petty thefts and cons, which lead to him getting a goose that lays golden eggs, being ostracized from the community, and his mother being held thrall in Blunderboar's giant clutches. After his adventure with Rapunzel, he returns to make things right. He finds that the city is in horrible disrepair. He cannot rescue his mom easily because the giant has enlisted the aid of fantastical creatures such as

Also, the city has been overrun by giant ants who wreck buildings and all kinds of institutions but curiously leave Blunderboar's holdings alone.

In the end, Jack and Rapunzel enlist the aid of the impressively named Frederick Sparksmith the Third with his bevy of gadgets and a pack of well dressed and coiffed pixies in their quest for justice and freeing Jack's mother. Jack sees Freddie as a rival for Rapunzel's attention, which adds a dash of intrigue to the proceedings.

Calamity Jack is another collaboration between a bunch of folks named Hale. Shannon and Dean are the married couple who wrote the story. Dean is a computer programmer, and Shannon is a YA author with a number of books under her belt, including the Newbery Honor book, Princess Academy. The art was provided by Nathan (no relation to the other two), who has created a few picture books and two of the best graphic novels about US history I have ever read as part of his Nathan Hale's Hazardous Tales series. His art here is still lively, colorful, and full of energy.

Reviews I have read about this book praise it, though not as highly as Rapunzel's Revenge. Ana from The Book Smugglers felt this book worked well as a stand alone volume and "very much enjoyed it." Snow Wildsmith wrote that readers "will thrill at Jack and Rapunzel’s most recent adventures, though librarians should be sure to have volume one ready just in case their readers haven’t seen it. Together the two books are a great start to a terrific series and readers will be eager to see what mishaps befall Jack and Rapunzel in books to come." Nicki from Fyrefly did not enjoy this book as well as its predecessor but still concluded "it's good fun."

A list of honors and reviews from the book is available here from its publisher Bloomsbury.