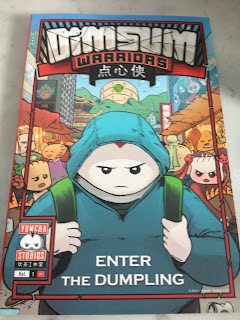 Recently at the 2013 AERA Conference in San Francisco I had the honor and privilege of meeting and presenting with a group of comics scholars, Nick Sousanis, Jarod Roselló, Christy Blanch, and one of the authors of today's book, Yen Yen Woo. She described this book as a combination of two major parts of Chinese culture, dim sum and kung fu. Using these cultural touchstones, she was able to create a story and characters that are simultaneously appealing and apt for use in language learning. Interestingly, this book is the English version of a dual language app meant to instruct English language learners (ELLs) who speak Chinese with English.

Knowing that sometimes texts written for educational purposes can be dry, stilted, or just plain boring, I am happy to report that none of those pitfalls are present here. These comics are well drawn, action-packed, and funny. There are fun similes: 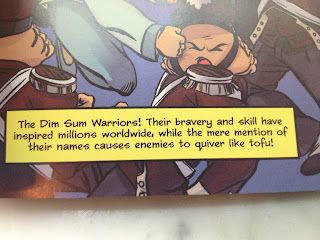 The main plot of the book involves Prince Porkroast Bao, who is somewhat at odds with the rest of his royal family. The young prince sneaks out to the marketplace and sees situations that do not quite match up with the news and counsel from the palace. His mother coddles him. His father thinks that he is just immature and ignorant of the demands his esteemed position entails, but there does seem to be an intricate subterfuge in play that involves the poor peasant classes, a popular energy drink, and the mighty Dim Sum Warriors, the defenders of the kingdom. This plot culminates in a competition between the four major factions of the Dim Sum Warriors (boiled, steamed, baked, and fried), with the winner given the honor of accepting Prince "Porky" (he hates being called that) into their fold.

This story is full of twists and humor. It was written by Colin Goh and Yen Yen Woo, a married couple who have made multiple websites and films. They speak about their work and backgrounds here at their official website. The artwork is dynamic, fluid, fun, and crisply presented by Soo Lee. There is much more about the creators and this work in this interview and also in this article from Publishers Weekly. The app was also written up in Time magazine.

I have not been able to find many reviews about the book online as yet, but I can personally say that it was a delight to read, with a cliffhanger ending that left me yearning for more. Additionally, the reviewer at Publishers Weekly commented positively about "Lee’s delightful illustrations and Goh and Woo’s engaging narrative" in this book version.

This book was published by Yumcha Studios. Here is an online tutorial for using the app version, which is also a quick preview of the story.

Thank you, Yen Yen, for making a great product and introducing me to your delightful work!
Posted by Stergios Botzakis at 12:00 PM