Stuck in the Middle: Seventeen Comics from an Unpleasant Age 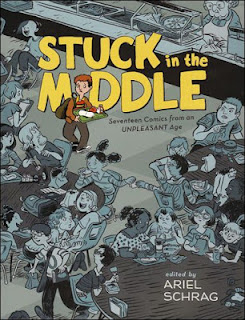 Middle school can be an awkward age for some, and this anthology captures much of what can be a turbulent time. The stories range across many themes, including:

The creators in this book include a good range of well established creators, including Dan Clowes, Ariel Schrag, Lauren Weinstein, Joe Matt, Aaron Renier, and Dash Shaw. As you can tell from the images, they vary stylistically, as do the stories, some being funny, others instructive, still others sad or dramatic. The standouts for me are
I felt that there was so much in this book to enjoy, laugh at, and/or sympathize with. The stories are obviously heart-felt and well crafted by creators who know what they are doing. Even though some of the tales are excerpts from larger works, I still feel that the glimpses we see into those worlds are worth exploring.

This anthology has received much support and praise. It was named one of the New York Public Library's Books for the Teen Age in 2008. It received a starred review from Booklist. Ned Vizzini remarked that it was "excellent, and the variety of the art ensures that the reader never gets bored." The reviewer at Publishers Weekly wrote, "This collection should help those in the midst of similar social travails realize that they, too, will someday look back and laugh at it all."

This anthology is a black and white kaleidoscope cast on the experiences of adolescents, and all of the stories smack of realism and moments that many can relate to. As a consequence, they deal with issues that teens deal with, including questioning authority, sex, drug use, drinking, and trying to make and keep friendships. These features have made this book somewhat controversial in some places and likely to be targeted for bans. There is some mature language throughout as well, though nothing worse than can be found in a YA novel or students' lives.

Stuck in the Middle was published by Viking.
Posted by Stergios Botzakis at 12:00 PM