Apparently, the fine folks at First Second have found a lot of success in their Science Comics series and have branched out into other areas. That series has been of overall high quality, and I have high expectations for whatever they publish. Their first other series is Maker Comics, which is sort of a practical extension of the SC series, with titles about fixing cars, baking, and building robots. I reviewed one title here, and I was pretty impressed with it. More recently, they also branched out with a series aimed at social studies topics, History Comics. They have two titles out so far, and I review them below. 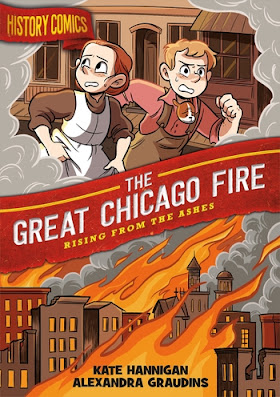 The first book I read was The Great Chicago Fire: Rising from the Ashes, which is about the huge 1871 blaze that destroyed a huge section of The Windy City. This book makes the events here very personal, following a couple of siblings Franny and J.P. who live nearby where the fire started and have to traverse the city in order to avoid the flames. They are great point-of-view characters who both narrate historical/geographic information and also put a human face on the goings-on. 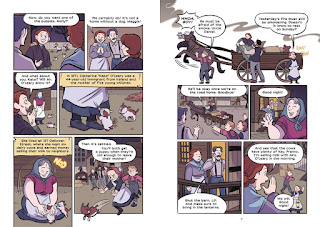 This book gets into all sorts of issues, including the prejudice against immigrants and how the legend was created that blamed Mrs. O'Leary (and her cow) as the cause of the fire. Attention is also paid to the urban planning (or lack thereof) at the time and how the city was rebuilt in the aftermath of the fire, with the advent of skyscrapers and other technological innovations. All of these were showcased 22 years later at the 1893 World's Colombian Exposition.

The end of the book is rounded out with some nifty features, like a timeline of events, a list of facts about the Chicago Fire, and a map of relevant historical sites to visit today. I really enjoyed reading this book, and I feel it's a good, highly accessible introduction to the series.

It was written by Kate Hannigan, a former journalist who has written a number of middle grades and picture books, including the multiple award-winning The Detective's Assistant. It was illustrated by Alexandra Gaudins, who also drew The Brain entry of Science Comics as well as a number of digital and webcomics.

All the reviews I have read of this book have been positive. Esther Keller wrote, "The fast-paced read is highlighted with superb artwork that evokes the time period and gives readers the feeling of chaos that ensued in Chicago." Kirkus Reviews concluded, "A fictive plotline adds a strong “you are there” feel to this informative account." 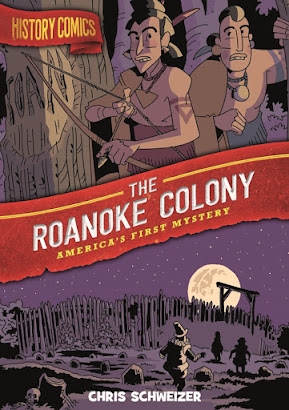 The second book I read was The Roanoke Colony: America's First Mystery, which is about the first attempts of the British to establish a permanent colony in North America. It is narrated by Wanchese and Manteo, two indigenous leaders that the English encountered. They offer a good contrast with their viewpoints, as in reality Wanchese was more weary of the British and their intentions. Both also traveled to England, and Manteo was the first Native American to be baptized into the Church of England. 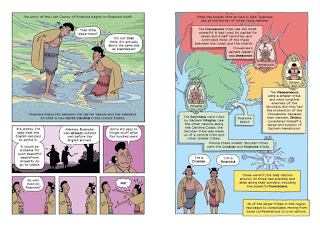 This book is more packed with information, and it gives a broad context to the times and geography. It tells of the various indigenous nations that were active in the area, along with their political structures, homes, and tools. It sheds extensive light on the British politics of the day, with particular attention to Queen Elizabeth I (who brushed her teeth with honey-!!!), "debonair hot boy" Sir Walter Raleigh, and pilot/pirate Simon Fernandes. It chronicles conflicts with rival European nations and also pirates. The failure of this colony lie in a great number of factors, including colonial cluelessness, skirmishes with local peoples, lack of supplies, improper training of colonists, needlessly cruel leadership, and privileging capitalist interests over people's general safety. I was impressed by how much nuance and detail is packed into this book with it still being so accessible and engaging.

This book does not have the same features that concluded The Great Chicago Fire, but I also feel that it covers lot more content in terms of historical context and complexity. Instead it ends with possible solutions to the mystery of what happened to this "lost colony" that was left to its own devices for months. These final pages offer a number of possibilities, starting with the evidence that they literally left a note on a tree that they had gone to the island of Croatoan (where Manteo was from) but storms complicated any search efforts. Among these possible endings are that the colonists may have been slaughtered by any number of factions, including natives or the Spanish, abducted by aliens(!), or assimilated into local nations. Reading this book, it is easy to see why this mystery is still so compelling, especially when presented in such a well-researched manner.

The creator behind this book is Chris Schweizer, who also made the volume of Maker Comics I just reviewed. Like I wrote then, he is a comics Renaissance man who has created a few series like the Crogan's Adventures and The Creeps. He has a bent toward historical works and is one of the best artists working right now, IMHO.

I have not found as many reviews of this book online, but the ones I have read have been full of praise. Carin Siegfried wrote that it "was a lot of fun, really informative, and I especially liked how the story was told from the perspectives of the Native Americans." As of this writing, it has a 4.14 (out of 5) star rating at Goodreads.

Both of these volumes of History Comics were published by First Second, and they offer more info about them and future volumes in the series here.