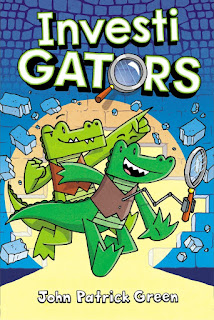 As a professor at UTK and a grad of UGA, I have an antipathy for gators. But Investigators is utterly charming and hilarious, and 5-year-old is currently obsessed with it to boot. It stars two gators named Mango and Brash who are agents of Special Undercover Investigation Teams (SUIT). You can tell them apart by their jawlines and coloring. Mango's jaw is round and he is dark green, while Brash is lighter green and has a square jaw. Clad in their high-tech Very Exciting Spy Technology (VEST), they go into action to solve some extraordinary cases. In this book they are trying locate a famous cupcake baker named Gustavo Mustachio, who has gone missing for two weeks, and suspect foul play. 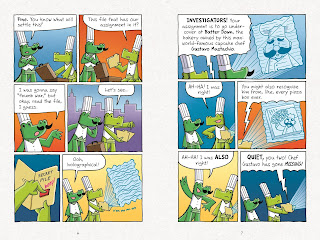 Also, they want to foil a villain who has stolen a device that digitizes physical money and automatically deposits it electronically. It even works through walls, which makes it especially harmful. It might not be so much a spoiler that these two cases eventually intersect.

As you might tell from the names of devices and agencies, this book is full of puns, and Mango is very fond of them, too. The back and forth conversations and sound effects are frequently funny. This book is also full of pop culture references and snappy dialogue, and the sum of all these things makes it a fun book to read aloud. There is also some potty humor, as the agents' main mode of transportation is flushing themselves down into sewers.

Adding to the fun visually is a wild array of characters and character designs. There is a triceratops escape artist named Houdino. There is a villainous crocodile who is part baked good named Crackerdile. There is a giant chicken who is also a scientist/inventor named Dr. Doodledoo. There is also Doctor Copter, a brain surgeon who was bitten by a rabid helicopter and who is compelled to transform into a helicopter to cover anything especially newsworthy. There is lots of whimsy and invention at play in this book, and my 5-year-old is really taken by this motley assortment of characters. He especially wants to read and re-read the chapters that tell Dr. Copter and Crackerdile's origin stories.

The end-papers also have a few bonus features, including a guide on how to draw the main characters, which my son is very into. Altogether, this book has lots to offer in terms of readers young and old. It is fun to read together. It has vibrant, unique characters. The plot is off-the-wall and the dialogue laugh-out-loud funny. It truly is a great graphic novel for all ages, which is a pretty hard trick to pull off.

This book was created by John Patrick Green. I enjoyed his first graphic novel Hippopatomister, and he has also drawn a number of other books for children as well as the mini-comic Teen Boat! written by Dave Roman. He speaks about the origins of the Investigators series in this interview.

All of the reviews I have read of this book have been positive. Kirkus Reviews concluded that it was "silly and inventive fast-paced fun." Publishers Weekly called it "fast-paced fun for the bad pun and dorky joke crowd: 'Now let’s flush ourselves down the nearest toilet and GATER DONE!'" Kate Quealy-Gainer wrote, "While the art is a bit more sophisticated than Pilkey’s Dogman, the tone is the same, and those waiting for the next installment of that series may want to spend time with this weird reptilian pair."

Investigators was published by First Second, and they offer a preview and more here. A sequel is due to be published at the end of the month.