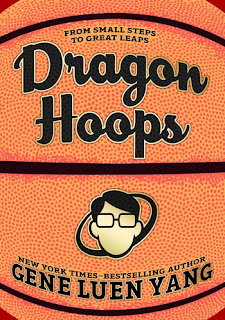 If you have been reading graphic novels (or this blog) for any length of time, you are probably familiar with this book's author Gene Leun Yang. He is one of the premier comics creators working today and a former National Ambassador for Young People's Literature. Additionally, he was awarded a MacArthur Fellowship and has also won the Printz Award for his graphic novel American Born Chinese. He also has won multiple Eisner Awards. He has explored themes of immigration, belief, identity, and growing up in his many works, including The Eternal Smile, Level Up, The Shadow Hero, the twin volumes Boxers & Saints, and New Superman. And (fun fact), I'll be talking with him this week about Superman Smashes the Klan.
The work on hand here, Dragon Hoops, is a rather personal one, about the 2014-2015 Bishop O'Dowd High School basketball team and their march toward a state championship. At the point of this story, Yang had worked at the school for 17 years but was not really much of a sports fan. Part of what drew him to the tale was the fact that the school had made the championship game before and was 0-8. Coach Lou Richie was an alum who played in one of those games and had coached teams in a few more, so his deep involvement and passion are palpable. Further, Yang was fascinated by the collection of players, a diverse set of high school boys with different viewpoints and goals, and how they came together as a team. So, there are lots of people to root for and engage with in this book. As a slight spoiler, Yang becomes a sports fan at the end of the book. 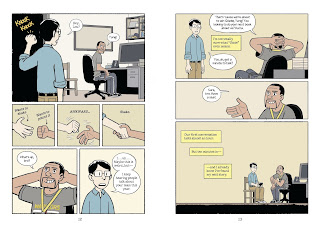 He does a superb job of tackling individual games and the drama they contain. His storytelling in these instances is as powerful as any sports narrative I've read or seen. But this book goes beyond the games. It lets us get to know the students (at least the ones who let Yang get to know them). It shows a side of what being a student athlete entails, with a nuanced exploration of race in multiple arenas. It also dives deep into history, giving background on the school, Catholic schools in general, and the history of basketball going back to Dr. Naismith. The coloring by Lark Pien further makes the games dynamic but also elucidates the many facets of the story. The work on this book is clearly extensive and beautifully presented.
Pushing beyond the boundaries of the sports narrative is a long thread of Yang making explicit that this book is a comic that he is composing. As such, it is full of omissions, biases, and intentional choices to force a certain type of narrative on the proceedings. It is fascinating to see him struggle with the decision to include Coach Phelps, a legendary figure at the school, because of unsettled allegations of sexual misconduct. It is also interesting to see him wrestle with two large decisions, one of whether to quit teaching and focus on creating comics full-time, the other whether or not to accept the position to write Superman for DC Comics, which is a lifelong dream. I also liked some of the metanarrative flourishes, such as when he discusses the specific ways that a student-athlete wants his hair to be depicted, with the conversation literally drawing out his options. This book is clever and self-aware, as much a meditation on the creative process as it is a product of said process. 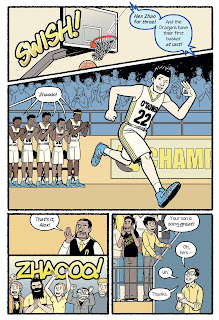 I can say with authority that this book offers much to a wide array of readers, whether they are sports fans or not. It is a long book but so compelling that I devoured it. Giving more insight into potential audience, reviewer Esther Keller opined, "I think the storytelling style is a bit sophisticated and better suited to high school students, but some middle school kids, especially those into basketball, can and will enjoy the story."
The reviews I have read about this book have been glowing. Michelle Falter wrote, "I love how this book is a sports novel about a coach and his team trying to win State for the first time, but also it delves into so so so much more. It deals with everything from fitting in, microaggressions and racism, to self-doubt and taking chances." In a starred review, Publishers Weekly concluded, "Using a candid narrative and signature illustrations that effectively and dynamically bring the fast-paced games to life, Yang has crafted a triumphant, telescopic graphic memoir that explores the effects of legacy and the power of taking a single first step, no matter the outcome." Jerry Craft wrote, "Framed from the start as a book about the struggle to create a book, Dragon Hoops animates the inner conflict between Gene Yang, computer science teacher; Gene Yang, family man (his wife and four children appear throughout); and Gene Luen Yang, graphic novelist. Is it possible to do all these things simultaneously without literally being Superman?" Kirkus Reviews wrote, "This creative combination of memoir and reportage elicits questions of storytelling, memory, and creative liberty as well as addressing issues of equity and race."
Dragon Hoops was published by First Second, and they offer a preview and more information about it here.
Posted by Stergios Botzakis at 12:00 PM