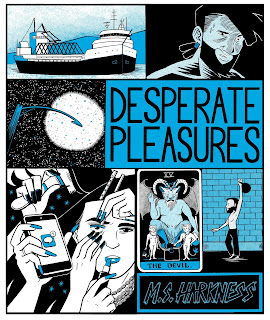 I read Desperate Pleasures because I have heard great things about the author's debut book, Tinderella. This book is the direct follow-up, and it has a more serious tone and features excellent cartooning that depict powerful scenes of loss and desperation. I feel it is a brave work of autobiography, where the author reveals much of herself as she ponders her life choices and trajectory. She spends her time attending college, dealing pot, and "sugar dating," which entails her dating older, rich men for sex and money. 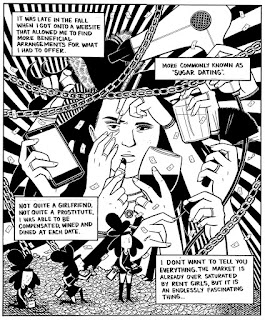 She also dabbles in online dating and has a few casual relationships with guys she deals to/meets at her local gym. 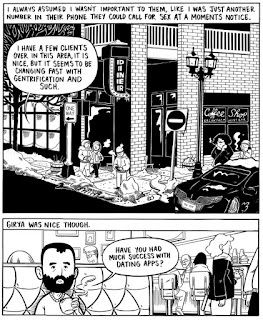 When one of these relationships gets more complicated, M.S. begins taking a look at her life and past, which brings her to revisit her childhood in Oklahoma, where her mother was an isolated wife with two small children and her father would only be seen during his shore leave. This flashback period is told in a slightly more realistic, softer art style and almost without dialogue, which heightens the drama. Some details are established, such as that her father sexually abused her, but others are left vague. In the present, M.S. has a healthy relationship with her little brother, regularly seeing him and coaching his workout routine at the gym. She has not spoken to her mother in years, and nothing is revealed about her father other than he was found guilty of sexual assault and imprisoned.

The resulting portrait is of a person reeling and in pain, trying to somehow medicate herself and learn how to feel. I admire her trying to find something healthy in her relationships, even when she makes some questionable choices. Still, over the course of the book she does make some changes and begins to find more of positive direction. Having such access to her private life makes for a compelling, uncomfortable, and visceral reading experience, perfectly complemented by expert storytelling. I really want to go read Tinderella now.

M.S. Harkness is best known for the aforementioned Tinderella, and she has also created a number of mini-comics. She speaks about her career and work on Desperate Pleasures in this interview.

Desperate Pleasures  was recently short-listed for the 2021 Cartoonist Studio Prize, and the reviews I have read about this book have been largely positive. Ryan Carey wrote that it is "a 'heavy' read on the whole, sure, particularly when contrasted with earlier works in Harkness’ oeuvre, but it’s never less than an absolute joy to look at." Publishers Weekly called it a "fresh anti-romance."

Desperate Pleasures was published by Uncivilized Books, and they offer a preview and more info about it here. Because of scenes of drug use, sex, and adult themes, I recommend this book for more mature readers.