Laura Dean Keeps Breaking Up With Me 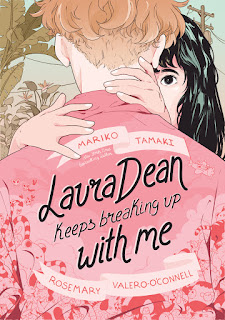 Laura Dean Keeps Breaking Up With Me has been on my shelf for way too long, one of those books that has been universally praised that I have extremely high expectations for. It lived up to them and more, I must say. I was especially caught up in the last third of the book, and it had me utterly transfixed.

The protagonist here is Freddie (short for Frederica). She is a bi-racial, 17-year-old lesbian who is in a toxic relationship with Laura Dean. Laura is White, beautiful, popular, and narcissistic, constantly stringing Freddie along with false promises, lies, and capricious attention. Freddie's friends know the score, and they are supportive of her without being judgmental. They wish she would dump Laura, but she just can't seem to bring herself to do that. She seeks the advice of a fortune teller and an advice columnist as well, but she does not really attend to anyone. 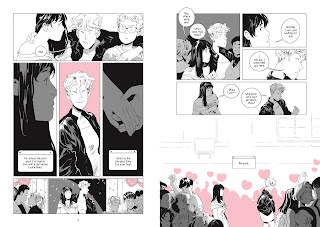 In addition to the major plot-line involving this romantic entanglement, this book is also one about friendship, particularly Freddie's with her best friend Doodle (Deidre). Doodle tries to support her but is frustrated by her failure to take up for herself. Also, she has quite a few issues of her own going on, issues that Freddie is too preoccupied to notice or offer support.

This book is exceptional in two ways, as a powerful narrative and as a phenomenally drawn book. Both combine to actualize strong characters, as even the secondary ones are vibrant and unique. Just as important is the setting, Berkeley, California, a place full of diverse people in a variety of senses. It is also a bohemian place full of coffee shops and organic food restaurants. All these factors combine to make a realistic, vital story. I very much appreciated how the relationships are depicted, warts and all, as well as how the individuals are shown as strong but flawed. This cast was great to spend time with and get to know, even when I was frustrated by some of their actions. This book really captured the ambiguity of being in a failing relationship but also feeling powerless to end it. I love how it disrupts simple notions of romantic love.

Both of this book's creators have won multiple awards for their work in comics. Writer Mariko Tamaki is known for This One Summer, Skim, and a number of more recent works for DC and Marvel Comics. Artist Rosemary Valero-O'Connell is best known for a number of excellent short stories that have been collected in Don't Go Without Me. Both creators speak about their collaboration on Laura Dean Keeps Breaking Up With Me in this interview.

This book has been hugely celebrated, winning Eisner, Harvey, and Ignatz Awards, and all the reviews I have read about it have been excellent. Kirkus Reviews concluded their starred review, "A triumphant queer coming-of-age story that will make your heart ache and soar." Shanda Deziel called it "fresh and exhilarating." Oliver Sava described it as "complex, experimenting with form to find different ways to expressively convey information."

Laura Dean Keeps Breaking Up With Me was published by First Second, and they offer a preview and more info about it here.