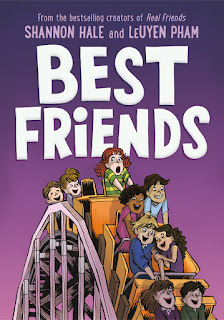 Best Friends is the follow-up to Real Friends, a very well-received, well-reviewed graphic memoir about the ups and downs of elementary school friendships. In this book, things get even more complicated when Shannon gets to sixth grade, the final grade of elementary school. Her friendships seem to carry higher stakes, as the oldest girls in school become the most popular and also have the most power to level at outliers and less social children. 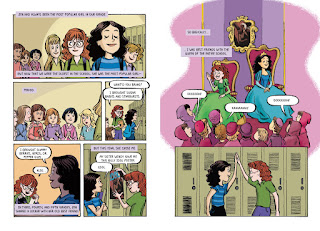 Being in the popular group brings its own pressures, and things get weird when some of her friends start doing things to purposely test Shannon's loyalty and trustworthiness. Also, she does not seem to watch the same TV shows or listen to the same music they do, which makes her feel out of touch and uncool. And on top of everything else, some of the friends start hitting puberty and turning their attentions to boys in complicated, often confusing ways.

Not only is Shannon dealing with a lot of moving parts in terms of school, friends, and gender politics, she also has to deal with her own struggles with anxiety. These manifest in stomachaches, very dark thoughts (about loved ones dying or her house burning down), and OCD tendencies, and they also hinder her confidence. One of her coping mechanisms is to channel her feelings into her creative writing, here a story of Princess Alexandra who finds a magic jewel with mysterious powers. She is quite imaginatively playful in general, an aspect of her personality that the popular girls just don't seem to get.

By the end of the book, and the onset of middle school, she learns more about what works for her and what satisfies her in terms of friendships and future aspirations. Not everything ends in tidy fashion, and I appreciated the attention paid to a realistic portrait of a young person's emotional life. I think that there is much here for younger (and even older) readers to relate to and even find solace in.

This book is another collaboration between author Shannon Hale and artist LeUyen Pham. The back pages of the book feature a lot of information about them and how they collaborate, and they seem like they are having a blast working together. Hale is a prolific children's book and YA author, and she has a few graphic novels under her belt, too, including Rapunzel's Revenge and Calamity Jack. Pham has drawn a good number of children's books, including The Bear Who Wasn't There, and has worked with Hale before on a series of The Princess in Black books. Both creators speak about their work on Best Friends in this interview.

All of the reviews I have read about this book have been positive. In a starred review, Kirkus Reviews called the book "insightful, introspective, and important." Sam Wildman opined, "I can relate to almost every panel on every page and I know young readers will feel the same." Ayla Jaganjac wrote that it was "amazing."

Best Friends was published by First Second, and they offer a preview and more about it here. The third book in this series, Friends Forever, (about life in 8th grade) is due out in August.