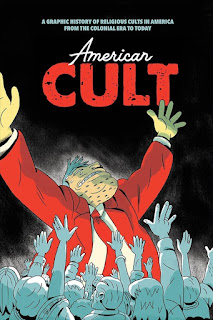 Comics anthologies can be very uneven, but I feel that American Cult is an excellent introduction into the strange, uniquely American blend of religion/fanaticism and capitalism/exploitation that is the cult. This phenomenon is defined in an introduction to the book, and many chapters straddle the line between reporting and commenting on these movements characterized by charismatic leaders and their sometimes insane, yet still convincing (to some) preaching. There are some of the "greatest hits" one who expect of such a book, including a look at the Jonestown Massacre (Ryan Carey and Mike Freiheit) and the Manson Family murders (by Janet Harvey and Jim Rugg). 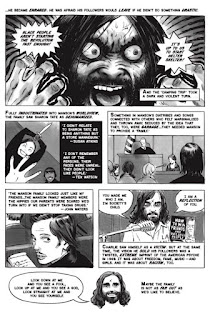 Some, like Lonnie Mann's "Orthodox Judaism is a Cult" are more potentially controversial in their takes on organized religion, while others Like Ben Passmore's examination of MOVE look at cults as political entities. 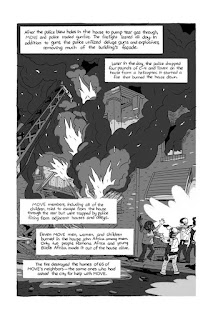 Some, like Josh Kramer and Mike Dawson's "Cults Reoriented" revealed strange connections like the one between Sufism Reoriented and the Cheescake Factory. Others are more wrenching and personal, like the particularly memorable entry by J.T. Yost, a look at a refugee from the Westboro Baptist Church. 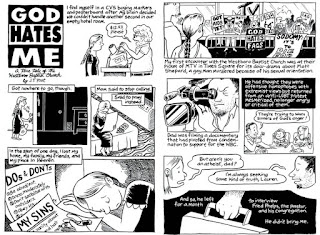 That the entries in this book are presented in chronological order invites comparing and contrasting them, and I learned a great deal about these various groups, even ones I thought I was pretty familiar with. This book is ideal for those interested in nonfiction, history, religion, or unique social phenomena. I got a lot from reading it.

American Cult was edited by Robyn Chapman, and she  also contributed an entry about Heaven's Gate. She has been involved in the comics industry in a number of ways, most notably as proprietor of Paper Rocket Minicomics. The book features story and art by creators I am familiar with, such as Box Brown, Mike Dawson, Mike Freiheit, Emi Gennis, and Ben Passmore, while also showcasing a bunch I am just learning about. I will definitely be on the lookout for more from them.

All of the reviews I have read of this book have been positive. Rob Clough wrote, "Chapman’s decision to sequence the stories in chronological order further cements this impression of history repeating itself. What makes this an interesting book to read is that the contributing artists use widely varying approaches." Publishers Weekly concluded, "Though these comics raise more questions than they answer, they sweep admirably through a little-understood phenomenon." Leonard Pierce called it "a pretty good reflection of its subject matter: never coherent, often shocking, full of little revelations, and liable to pull you in to its strangely riveting view of the world."

American Cult was published by Silver Sprocket, and they offer a preview and more about it here. Although it is about US history, this book features a lot of sex, drugs, and profanity, so it is suggested for more mature readers.