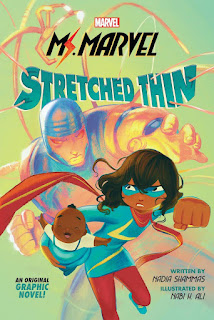 This second volume in Marvel Comics' new young adult line of graphic novels focuses on Ms. Marvel, a Pakistani-American girl who gains "embiggening" powers and fights for justice from Jersey City. I have been reading Kamala Khan's adventures since the character was created and have read pretty much all of her solo comic books, and this book nails her characterization. She is tough, smart, and driven, perhaps too much at times. She is also a kind friend, dutiful daughter, and high achiever who always strives to be the best.

As the title relates, Kamala is tackling a bit much. She is trying to balance her home life, school work, friendships, fan-fic writing, and Quran school with her superheroics, and she is starting to burn out. She has the great responsibility of caring for her small cousin Malik while his parents are away, and everything is getting to her. She starts to cut corners. One day, a mysterious package arrives, containing a toy robot. Malik loves it and it soothes him, so she does not think twice about charging it using her computer's USB port. That is where some major trouble begins.

What I liked about this book most was how well it captures the original Marvel Comics feel of "real world" superheroes. Kamala, her family, friends, and superhero associates Miles Morales and Squirrel Girl are all shown to be unique characters with distinct personalities and drives. Also, her life is authentically complicated. Kamala is caught between fulfilling her family and community obligations, and I think that she comes off as heroic but also grounded in reality. There are so many tensions in her life, which I think reflects the reality of most people, especially today, and it is great rooting for her to get things together.

The artwork is colorful and dynamic, and so attractive that my two-year-old daughter snatched the book up as soon as I got it and flipped through its pages without letting me even look at it. She would not give it back either. After she went to bed I got to finally read it, and I found that the characters' emotions and actions are depicted in clear, bold fashion, and I loved the visual storytelling. I think that it acts as a great lead-in to her adventures and world to those who might not know who she is, but it is also a satisfying read for an old codger like me, who has read a gazillion superhero comics. It's a fun read for fans new and old.

The main creators of this book were writer Nadia Shammas and artist Nabi H. Ali. Shammas has been working on a graphic novel called SQUIRE that is due to be published soon. Ali is an illustrator who has worked on a number of prominent projects in comics, art, and video media. Shammas speaks about her life and work in this Q & A. Both creators comment on Stretched Thin in this article.

I was not able to find many reviews of it online, which I thought was curious, but the ones I have read have been positive. M.L Kejera called it "a moving work for younger readers that feels tailored to their worldview without condescension." It currently has a 4 (out of 5) star rating on Goodreads.

Ms. Marvel: Stretched Thin was published by Scholastic Graphix, and they have an excerpt and more information about it here.