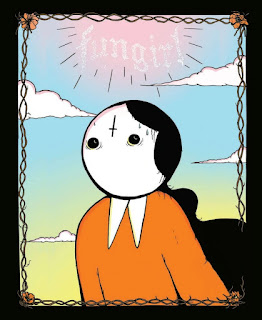 I have not read a book as enjoyable, funny, and profane as Fungirl in a long time. The title first came to my attention because of a kerfuffle about its mature readers label (an depictions of sex toys) for a book on Free Comic Book Day. I picked up that issue from my local comic shop, and it set me up well for the whole book.

This book reads like a wonderfully deranged situational comedy, in the best kid of way. It stars the titular Fungirl (her actual name is not given), a young woman who I have seen described aptly as a "hot mess." She has no job, a long line of dysfunctional sexual relationships, and few prospects for the future. She lives with her roommate (an ex-girlfriend) Becky, a hard working relatively normal person, and they often deal with Peter, Becky's polite-to-a-fault boyfriend. Much of the humor of the book comes from watching these three bounce off each other, but there are also lots of strange, unique situations. 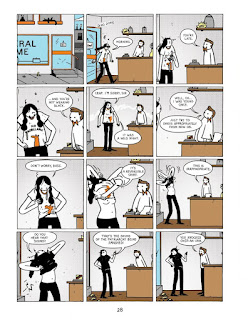 Early in the book, Fungirl finds a job as a mortician's assistant, a position where she creates all sorts of mayhem. She takes naps in coffins, sets multiple accidental fires, gets extreme in making up the corpses, and has some really strange interactions at a professional convention that features unusual rivalries between undertakers. In addition, there are lots of other embarrassing, uncomfortable, and hilarious situations she finds herself in, including visits to llama farms, drunken revelries, bus rides, shopping expeditions, and a memorable self help seminar. 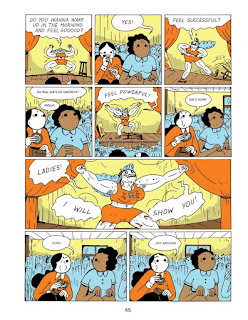 Whenever there is a crossroads, Fungirl can be counted on to make a misinformed decision that ends in calamity and hilarity (for the reader). Still, she does try her best and occasionally there are moments of fleeting clarity and insight. These are few and far between, however, and most of the book is chock full of jokes and humor. I laughed out loud while reading this book quite a few times, and I could not stop reading it, even though I planned on taking my time. If you like compelling graphic novels and laughing at others' misfortune, this is the book for you.

Fungirl was written and drawn by the German artist Elizabeth Pich. She is best known as co-creator of the popular webcomic War and Peas.

All of the reviews I have read about this book have been positive. Calvin Reid called it "awkward, biting, shameless, wildly improper, aroused, maybe even dangerous." Publishers Weekly described it as "an outlandish romp past the boundaries of good taste and into dangerously revealing—and truly funny—psychic territory." There are more reviews at Goodreads where it has a 4.1 (out of 5) star rating as of this writing.

Fungirl was published by Silver Sprocket, and they offer a preview and more information here. As should be clear by now, this is not a book for kids.