Rebecca and Lucie in the Case of the Missing Neighbor 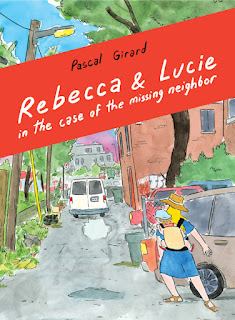 There is an avalanche of true crime and mystery narratives lately, but Rebecca and Lucie in the Case of the Missing Neighbor stands out for its offbeat set up and strong characters. Rebecca is a new mom, and she is wary of her maternity leave running out and not getting to spend so much time with her 8-month-old daughter Lucie. One night, after breast-feeding her daughter, she sees a couple of people loading something heavy into a white van and thinks nothing of it. Days later, a local homecare worker is reported missing and her alarm bells start going off. In small pockets of time, between caring for her daughter and shopping around for daycare options (a bittersweet occurrence), she begins her own investigation.

The local police and her social worker husband seem skeptical of her efforts, and the family of the older woman who received care from the missing person begin to cry harassment, but Rebecca persists in her quest. 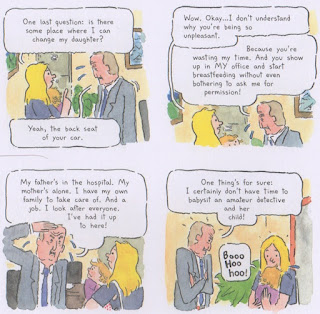 What follows is an interesting series of events, some trails pay off while others are dead ends. In all, this book is great because it tells a compelling mystery while also shedding insight into what it is like to be a parent/spouse/worker in these times. This book is deceptively simple, both in terms of its spare but colorful artwork and streamlined story, but it pays off as a unique and fun genre piece. I could easily see (and would look forward to) there being future adventures of these sleuths.

Rebecca and Lucie in the Case of the Missing Neighbor was created by Pascal Girard, a part-time social worker and cartoonist. He has published a number of other graphic novels, including Nicolas, Bigfoot, Reunion, and Petty Theft. Girard speaks about his craft in this interview.

All of the reviews I have read of this book have been positive. Rachel Cooke appreciated how Rebecca is based on Girard's wife and "that this sweet, funny book is a tribute to her courage, her determination and, above all, her wit." Publishers Weekly wrote that it  "succeeds as both a mystery and a chronicle of day-to-day parenthood. Readers won’t be disappointed if this evolves into a series of offbeat mother-daughter mysteries." Brian Nicholson called it "a breezy romp, coming in at under a hundred pages, and featuring attractive, accessible cartooning."

Rebecca and Lucie in the Case of the Missing Neighbor was published by Drawn & Quarterly, and they offer a preview and much more here. This book was originally published in French and was translated by Aleshia Jensen.