Too Tough To Die: An Aging Punx Anthology 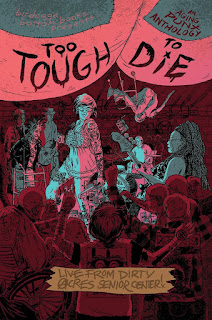 I have read a few anthologies published by Birdcage Bottom Books (like this one), and they have always been interesting and/or provocative, introducing me to some new artists along the way. Too Tough To Die is a weighty tome featuring 47 different entries. Many focus on autobiographical tales of people's punk rock fandom. There are references to lots of bands and multiple reasons why these people were drawn to punk rock. For some, there was family situations that made the scene relatable; others just liked the crass humor; some found it an appropriate response to hypocrisy, and others found kinship in the motley assortment of punks. Many of the stories speak to punk more as an ethos than a fashion or musical movement and also speak to how it was not just some youthful phase but a blueprint for being a critical and informed adult.

These stories are not all about sharing mix tapes, though there is plenty of that. They are not overly nostalgic, depicting scenes of violence, some substance abuse, and a number of other poor life choices. Many also address some of the more sinister aspects of the scene, such as the presence of white supremacists and skinheads. Many of the stories puncture any pomposity of the narrators, as contemporary young people have their own particular mindsets and wonder why these lame old folk keep trying to impress them, even if they might be into the same bands.

In terms of representation, I really liked seeing the multiple ways that people found their ways into punk consciousness. There are tales from men, women, people of color, city dwellers, suburbanites, and kids from the country. There is also plenty of discussion about how punk intermingled/juxtaposed with other movements, such as hair metal, grunge, and alternative music.

There are too many stories for me to explain fully, but I loved the range of formats and styles. Some are short, almost like gag strips. Many are pretty raw, featuring rough lines and splotchy black and white images, mimicking the format of zines. One of my favorites, concluding the book, is series of images and biological accounts by Haleigh Buck in the style of show posters. Maybe it's because I am squarely in the age demographic of many of these artists/stories, but I found much I could empathize with and relate to. This anthology is phenomenal.

This collection was edited by Haleigh Buck and J.T. Yost. Yost has done all sorts of comics over the years, including a memorable tale about the Westboro Baptist Church in American Cult, and also founded and runs Birdcage Bottom Books. Buck is a frequent contributor to anthologies and has created a number of comics and mini-comics.

The reviews I could find of this book have been positive. Publishers Weekly summed up, "This is one awesome and introspective ode to rebellion." It currently has a 4.7 (out of 5) star rating on Goodreads.

Too Tough To Die was published by Birdcage Bottom Books, and they offer a preview and more here. This book features profanity, some sexual situations, and drug use, so reader discretion is suggested.