Fante Bukowski is funny and profane, a great send-up of a pretentious 23-year-old who quit his daddy's law firm to move into a cheap hotel, drink heavily, pick up women, and become a writer. However, he is more interested in living the writerly life than actually improving on his craft. Ungifted by talent and armed with a pen name portmanteau of his two favorite authors, he attempts to navigate the world of publishing, poetry readings, and being a literary genius while bumming checks from his mom. The fruits of his struggle are pretty hilarious. 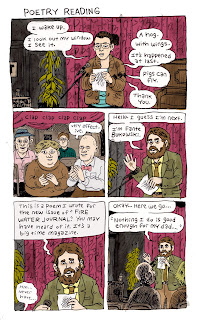 The first time I read this relatively short book, I was incredulous. The second time through, I was frequently tickled at the multiple disastrous forays into serious literature. In part I was amused to see a Holden Caulfield-style parody in action, all full of rage toward the "jocks" of the world but ultimately clueless.
Such a figure is pretty low hanging fruit, and it is difficult for me to say that he goes through any real growth or change (though the ending sort of points to perhaps the next step in his evolution). Ultimately I still found I really enjoyed this book because of its situational comedy and the actual "literary pieces," which are most enjoyable in and of themselves. They are fun to read, and I bet they were a hoot to make up as well. Overall, I loved the send up of an overblown literary scene, replete with conniving agents, hangers-on, and the obligatory Dave Eggers cameo.

This biting lampoon is the product of Noah Van Sciver, author of the graphic novels The Hypo: The Melancholic Young Lincoln and Saint Cole. He is also known for his many mini-comics (some collected here) and the series Blammo. He also has a Tumblr page where he first posted episodes of Fante Bukoswki. He speaks about  the book in this interview and more about his various works in this Comics Alternative Interview (Hi, Andy!).

All the reviews I have read of this book have been positive. Spencer Hicks called "a complicated and very funny new comic." Benn Ray called it "an excellent study in the self-deluding nature of artists and an immediate Van Sciver classic." Tom Murphy praised Van Sciver for "delivering caustic satire while still maintaining a degree of empathy for its flawed characters."

Fante Bukowski was published by Fantagraphics, and they have a preview and much more available here. Because of the language and sexual situations, I suggest this book for readers mature enough to handle both.
Posted by Stergios Botzakis at 12:00 PM