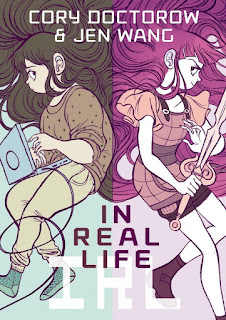 Stereotypes that video games are for boys prevail even though statistics indicate that about half of all gamers are female. In addition, eruptions such as Gamergate show that in many ways female gamers are sometimes the target of misogynist agendas. Even though such ugliness is not overtly referenced here, it is in the background of this graphic novel, In Real Life. The protagonist here is Anda, a teenaged D&D fan who is inspired by a guest speaker at school to try playing a MMORPG. 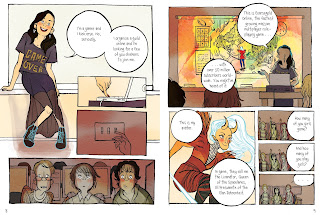 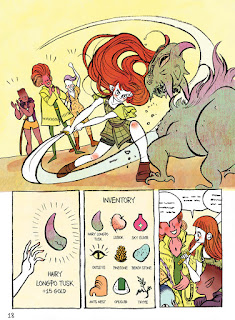 Also, she joins a clique of video game activists who seek to root out the farming that is happening in the game. Anda likes the camaraderie that comes with joining this group and also enjoys the sensation of making this world a more equitable place while also making some actual money when she gets paid for completing these missions. 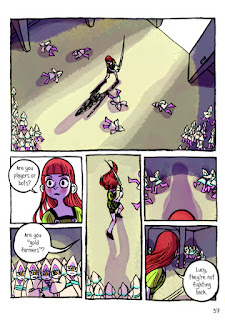 This real life reward makes her parents suspicious of what she is doing online, but there are other consequences when she befriends one of the farmers, a Chinese boy named Raymond who supports himself by farming. Not only does this friendship complicate Anda's worldview, it also has a massive impact on Raymond's life when he takes Anda's advice and tries to get his fellow workers to demand improvements in their working conditions. I do not want to spoil the ending, but  I did think it was a bit pat, that things did resolve perhaps a little too neatly. Still, I felt that overall this was a worthwhile book that highlighted the ways that consumerism, gender, fiction, and business intersect in complicated ways.

This ambitious and beautifully drawn book is a collaboration between Cory Doctorow and Jen Wang. Doctorow is an award winning author of multiple YA books, including Little Brother and Homeland, a blogger, and the co-editor of Boing Boing. Wang is an artist and illustrator, and her debut graphic novel was Koko Be Good. I love her artwork, with its flowing lines, cool pastel colors, emotive characters, and fun energy. Both creators speak about their work on In Real Life in this interview.

All of the reviews I have read about this book lean to the positive. Chris Taylor offered his opinion that "they’ve shoehorned rather too much into the story for this to be entirely effective," but added that it "is a powerful narrative nonetheless." Kelly Thompson summed up that it was "a socially relevant, heartfelt and emotionally engaging story about a female gamer that will likely inspire and encourage generations of awesome girls." Jonah Gregory wrote, "It’s an enjoyable read and the messages it wants to convey aren’t so heavy handed as to be distracting."

In Real Life was published by First Second, who provides a preview and much more here.