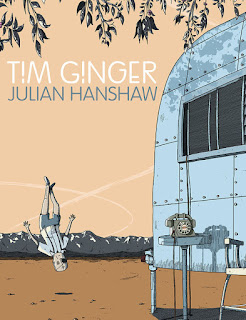 I think if there is any question that we are living in a great age for graphic novels, Tim Ginger would settle it. This beautiful, spare, idiosyncratic  book is unlike other graphic novels I have read, with a pretty singular subject and wonderful execution. It focuses on the life of an ex-test pilot living out in the desert after being widowed. He leaves this sanctuary to go on a book signing tour where he encounters a persistent conspiracy theorist who keeps asking him questions and an old friend who brings back lots of buried feelings and remorse. 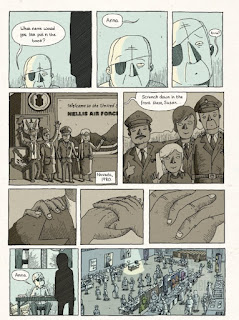 All of these interactions are prelude to contemplations of life, marriage, family, legacies, love, and keeping secrets. Additionally, his old friend is a potential old flame who has written a book of comics about people who decided to not have children, which is excerpted throughout, adding a meta-commentary to the proceedings. I feel the entire narrative is mature and nuanced, aided by expert storytelling that is effective at simultaneously being evocative and subtle while also incorporating some flights of fancy. 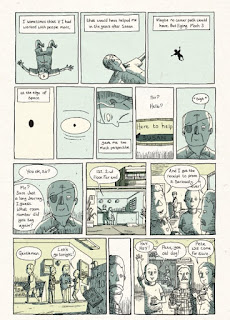 I feel that the artwork is appropriately stylized so that feelings are as muted as the coloring, and overall I was quite moved by what I read. I cannot see this book being of much interest to younger readers, but I feel that it is an excellent meditation on life, love, and finding one's place in the world.

Award winning artist Julian Hanshaw created this volume. He is from the UK and is known for his prior two graphic novels The Art of Pho (also available as a motion comic) and I'm Never Coming Back. Tim Ginger is his US debut, and he speaks at length about its creation in this article.

All of the reviews I have read about this book have been full of praise. Joe Gordon called it "a hugely satisfying, maturely emotional work, which gets under your skin in a quiet, calm, gentle manner." Neil Bason praised it as "deeply moving, brilliantly witty, and wonderfully written." Chris White wrote, "The story of Tim Ginger will stay with me for some time, thanks to the great writing and artwork—take a chance on this smart, funny and emotional indie comic and thank me later."

Tim Ginger was published by Top Shelf, and they provide a preview and more here.
Posted by Stergios Botzakis at 12:00 PM