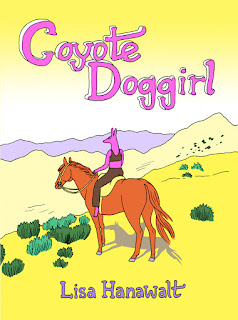 Coyote Doggirl is a fantastic graphic novel, full of heart and humor while not skimping on the drama. It is deceptively simple in appearance, a sparse tale of a female coyote/dog hybrid who just wants to live a quiet life on her own terms. Mostly, she just wants to tend to her modest piece of land and incredibly fast horse named Red. 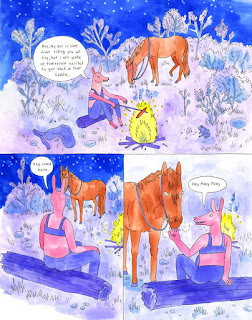 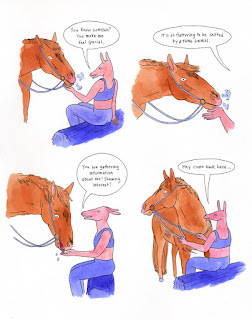 When the book begins, for reasons I will not spoil, she is being pursued by a band of cowboys who want revenge on her. As she tries to elude their grasp, she gets shot with multiple arrows and the stories begins to take one of multiple plot twists.

Coyote Doggirl's plight is relatable and she is very easy to root for. She meets and gets to know a band of indigenous folks, who take her in and teach her about their ways and herself. One of the most enjoyable parts of this book for me was how deftly its plot is woven, in ways that both pay homage to traditional western stories while also critiquing them and turning them on their ears. The ending of this book seems to me to be open-ended, and I would love to see the adventures continue.

I loved reading this book. It is relative short and brisk to read, but it is filled with much detail and nuance. The title character has an idiosyncratic personality and is a terrific fashion designer to boot. The dialogue is snappy and terse, and the artwork is delightfully composed and paced. The character designs in particular are very strong, and the coloring is both vibrant and pleasing.

This book's creator Lisa Hanawalt is an illustrator and animator who is best known for her production and design work on the Netflix series BoJack Horseman. Although this book is her first graphic novel, she also has published a couple of comics collections named Hot Dog Taste Test and My Dirty Dumb Eyes. She speaks about her work on Coyote Doggirl in this interview.

All the reviews I have read of this book have been very positive. Mel Schuit wrote, "Coyote Doggirl might share a lot of the same tropes as a traditional Western, but it’s peppered with quick wit, cute clothing, and lots of ass-kicking, making it a modern day Western classic." AJ Frost described it as "an unabashed western with a contemporary twist as well an imaginative take on the genre that feels more mature and grounded." Lenika Cruz elaborated, "Hanawalt’s book sheds the self-seriousness of the genre, but it also retains another sort of poignancy—one anchored by the heroine’s free spirit and stubborn sense of wonder in spite of the constant dangers she has to navigate."

Coyote Doggirl was published by Drawn & Quarterly, and they offer a preview and more here. Because it features profanity, some sexual violence, and mature themes I recommend this book for mature readers.
Posted by Stergios Botzakis at 12:00 PM