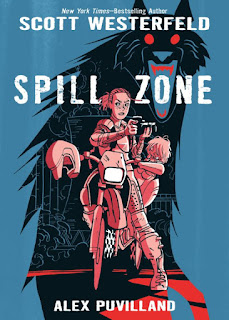 I must admit part of why I read this book is because it is set in Poughkeepsie, New York, which is right across the river from where I grew up. There is a part of me that is fascinated to see a place I know be ravaged by a destructive force and made into a wasteland. Spill Zone is a compelling work of science fiction that features quite a bit of mystery and intrigue. The set-up of the plot is that three years ago, something strange happened that transformed this city into something hazardous to humans, where the living things are mutated and beyond dangerous. There are places that turn living things into two dimensional figures, places where people are animated as "meat puppets" that float around with glowing eyes, places populated with cats who constantly cry out in what sounds like the word "wrong." And the rats, don't even let me tell you about them.

Just outside of this town lives a young woman named Addison, whose parents were in the city when things went down. Now she lives in isolation with her little sister Lexa. She ventures out from time to time, illegally, in order to explore the city and take pictures. 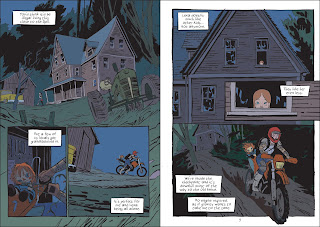 Not that she is just some civilian documentarian, she is selling the photos on an art black market. Her trips into the city bring her into contact with many dangers, and in the course of the book we are also privy to a great many mysteries. Such as, what happened in North Korea at the exact same time as the incident? Why doesn't Lexa ever talk? What's up with Lexa's weird doll Vespertine? And biggest of all, what was the cause of the incident? All of these questions drive a well plotted introduction to this world, and happily (for those wanting a sequel) almost none of them are resolved.

This book is a fantastic introduction to this fictional world. The artwork, as you can see from the preview, is appropriately energetic and creepy. The characters are well defined, and what we do learn is just enough to want me to keep reading on. I loved the level of action and plot twists here, and I cannot wait to get my hands on Book 2.

This book is a collaboration between author Scott Westerfeld and artist Alex Puvilland. Westerfeld is an accomplished novelist with multiple credits for adults and younger adults, with The Uglies series being his most notable works. Puvilland is an animator and illustrator who has worked on feature films like Shrek 2 and Boss Baby as well as illustrating a graphic novel version of Prince of Persia. Both creators discuss their work on this series in this interview.

All of the reviews I have read of this book have been glowing. In a starred review, Publishers Weekly called it "fascinating and hard to forget." Kirkus Reviews wrote that "readers will be demanding the next installment as they close this one," and summed it up, "A necessary start, with intriguing hints at action and weirdness to come." In another starred review in School Library Journal Matisse Mozer wrote, "This unnerving, gripping title—Westerfeld’s first original graphic novel—is bound to entice older comics fans, especially those interested in darker sci-fi and nuanced characterization."

Spill Zone was published by First Second, and they have a preview and more available here. The second volume is available now, and you can read a preview of it here.
Posted by Stergios Botzakis at 12:00 PM