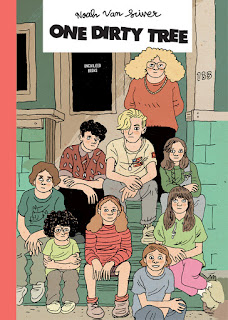 One Dirty Tree is a graphic memoir written by Noah Van Sciver, the Ignatz Award winning author of the graphic novels The Hypo: The Melancholic Young Lincoln, Saint Cole, and Fante Bukowski. It explores a good number of uncomfortable situations. For the most part it looks backward to his childhood in New Jersey where the Mormon family of ten lived in a dilapidated house. The house is a sort of a metaphor for familial difficulty with its crumbling walls, splintery floors, and bathtub full of dirty dishes. Dealing with poverty and his father's unstable mental state are two major obstacles for the family, and NVS also delves pretty deeply into sibling dynamics as well as how he tried to build social connections with friends. These sections of the book also often left me emotionally raw and troubled, even though they feature elements of humor. I think my point is illustrated by this excerpt showing an unconventional bath time routine.
In addition to the (often dark) humor, there is also a wonderful sort of nostalgia about the early 1990s throughout, which I enjoyed reading (velociraptors and Ralph Snart!). A good portion of the book also shows contemporary Noah, who is trying to deal with his past and also his present realities. He is striving to make and publish comics, which involves him taking service jobs in order to pay the bills. Also, he is dating a woman who does not seem to fully understand or support what he is trying to accomplish with his career. Thus, he is frequently frustrated by his current plight and comes off as a latter-day, grown-up version of Charlie Brown. He just cannot catch a break, it seems. 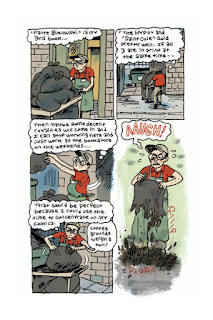 If you have not caught on from reading this blog yet, I am a big fan of Noah Van Sciver, and I have read lots of his work. I feel that One Dirty Tree is one of his best books, as it is very personal, revelatory, funny, and relatable in the most embarrassing ways. Each page could almost be a self-contained tale, as they are individually packed with poignant, pointed observations. Thematically, I find it similar to a memoir like The Glass Castle, although I should note that the voice and circumstances here are uniquely his. Overall, I tend to think of NVS's works as beautiful, slow-motion train wrecks, and this one is especially compelling.

In addition to his numerous graphic novels, Van Sciver is also known for his many mini-comics (some collected here) and the series Blammo. He has a Tumblr page where posts many of his works in progress. He speaks about his career and work on One Dirty Tree in this interview with Caitlin McGurk at The Comics Journal.

All of the reviews I have read about this book have been positive. Robin Enrico wrote that with it Van Sciver "further cements his status as one of the foremost cartoonists working today." Publishers Weekly called it "moving" and elaborated, "While affectionate in many memories, Van Sciver also powerfully illustrates the scars raked across an adult life by a chaotic upbringing."

One Dirty Tree was published by uncivilized books, and they offer a preview and more information about it here.