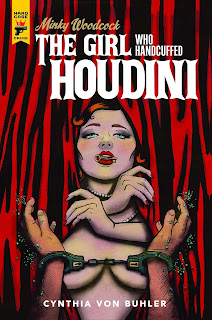 Minky Woodcock: The Girl Who Handcuffed Houdini collects the four-issue comic book series in a gorgeously illustrated and lustrous hardcover. It is a delightful piece of historical fiction, a detective tale set in the early 20th century, where Harry Houdini is engaged in both amazing escapes while also lecturing to debunk fraud being perpetrated by so called mediums at staged seances. The latter enterprise brings him into conflict with famed author Arthur Conan Doyle (creator of Sherlock Holmes), which is based in historical fact. Here, the enterprise also drives at least one party to attempt to murder the famed magician/escapist. 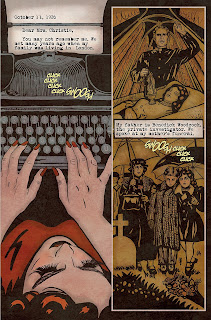 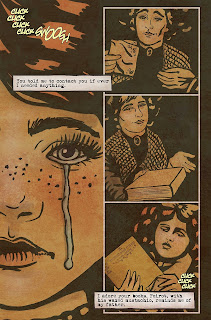 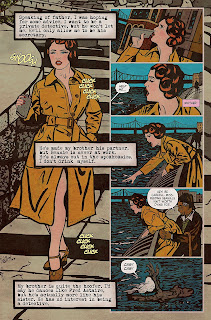 Enter into this situation the crafty and resourceful Minky Woodcock, the daughter of an investigator who seeks her own life of intrigue. She ends up traveling with the Houdinis and investigates the suspicious happenings. Minky poses as Houdini's assistant, and she proves quite an asset to his act and also his debunking charlatans. She also gets deeply involved with the couple in personal ways, which creates its own set of complications. The rest of the plot unfolds in a combination of historical fact and fantasy, spinning an engaging and titillating mystery tale.

The highlight of this book for me was the luxurious artwork by Cynthia von Buhler, a Renaissance woman who acts, paints, sculpts, and creates in many ways. Here, the artwork properly evokes a sense of history with its stylized layouts and character designs. Not only are the main characters strong and sensual, the whole book also pops in terms of linework and coloring. She speaks more about her work on Minky Woodcock in this interview. Also, this book will be adapted into an off-Broadway production, which seems very cool.

I was not able to locate many reviews about this collection, but the ones I found were positive. Ryan C. Bradley called it "a love letter to noir" and "a Houdini pastiche that offers a new theory about his death." Kristel Yeager summed up, "Amazing art and unique storyline."

Minky Woodcock: The Girl Who Handcuffed Houdini was published by Hard Case Crime/Titan Comics, and they provide more info and a preview here. This book features some profanity, nudity, and sexual situations, so I recommend it for mature readers.
Posted by Stergios Botzakis at 12:00 PM