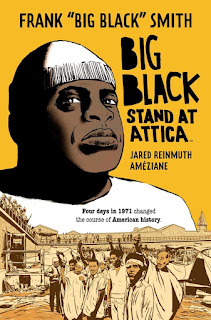 Sometimes I read a book and think about how much life has changed in a span of time. Other times, like when I read this book Big Black: Stand at Attica, I am disheartened and frustrated to see just how much some injustices still persist. This book is an account of a prison uprising in 1971, a moment that exposed just how racist and exploitative the prison system was. Also, it was an event that showed just how ruthless and uncaring the prevailing governmental structure was, when a wealthy governor with grand political aspirations authorized the slaughter of black men to show just how tough and "law and order" he was.

What makes this book work so well is to things. One, it is based on a real account and is clearly well researched. There are many details about the workings of the political and prison systems as well as background on all the major players in this drama. Two, the artwork is mainly journalistic or documentary in its presentation. It makes you feel like you are witnessing actual events, and the storytelling hits in a visceral way. In contrast, each chapter heading has a superhero comic book quality to it that heightens the events further, drawing attention to some of the major themes of the book. 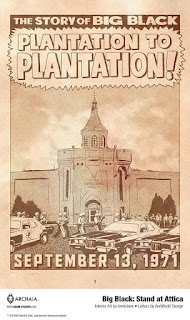 The net effect is that the reader gets to know a good number of these people in quick fashion, and it is difficult not to be affected when all attempts to work toward justice and compromise are met with brute, military force and wholesale destruction. Also worth noting, this book highlights just how much the government manipulated public opinion through misinforming and misleading media accounts of what was going on. Today, there is so much talk about media literacy and "fake news," and seeing just how far back these concepts go was eye-opening.

The uprising (the less sympathetic called it a riot) was a flashpoint event that revealed much about the racism and classism of the US, and I am sad to realize it took me this long in my life to learn about the facts. Up until recently, I really only knew about it via that one scene where Al Pacino leads a chant of "Attica, Attica" in Dog Day Afternoon, but I was largely ignorant of the actual events. Given how contemporary the issues at play in this book are, it is shocking that they are not really part of US history curriculum.

I realize that this book is biased, certainly meant as a form of activism, but it's tough to take the side of those who brushed aside any sort of negotiation and went in guns blazing, to the effect of 43 people (including 10 guards who were being held hostage) dead. This graphic novel tackles issues that still plague the US today, namely the looming presences of racism and the (now even larger and more industrialized) prison system, and it does so in gut-punching and moving fashion.

This book was created by author/actor/educator/activist Jared Reinmuth and artist Améziane, based on personal interviews with Frank "Big Black" Smith. "Big Black" was a central figure in these events, and he was later tortured by guards for his role as head of security during the revolt. Améziane has also drawn biographies of Muhammed Ali and Angela Davis, an account of the 1989 Tianamen Square protests/massacre, and fiction in the series Cash Cowboys. Reinmuth speaks more in this interview/panel.

All of the reviews I have read have praised this book. In a starred review, Publishers Weekly concluded, "This penetrating portrait of a broken correctional system and a flawed man focuses on his legacy of courage, which towers over the forces stacked against him." Mikkel Snyder wrote, "If you have an interest in history, memoir, social justice, or just the life of a good man in an extraordinary circumstance, you should track down a copy and experience the story directly." Rhea Rollmann wrote that it "does a marvelous and respectful job of telling this harrowing story." Ally Russell Shields also noted that the "decision to include more mature content makes the graphic novel feel more authentic and relevant, yet may prevent it from reaching a younger, school-aged audience which might otherwise benefit from its timely message."

Big Black: Stand at Attica was published by Archaia, and they offer more about it here. This book portrays racist abuse, torture scenes, profanity, and graphic violence, so it is recommended for mature readers.