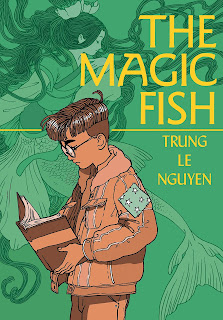 The Magic Fish is a gorgeous and touching book that melds together contemporary life with fairy tales. Its main character is Tiến, a teenage boy who struggles with a number of identity issues. His parents are Vietnamese, immigrants who fled a tyrannical situation and who have been separated from their family. 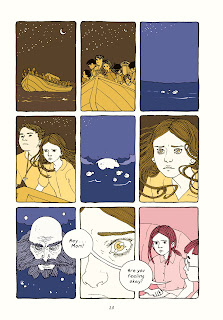 Tiến tries to bridge a language gap with them (particularly his mother) by sharing stories, fairy tales that transcend culture.  Over the course of this book, there are three tales told, versions of Cinderella, the Little Mermaid, and the Magic Fish, and they are told by three different people, which speaks to how people use story to both communicate and cope with difficult circumstances.

At school, Tiến tries to fit in with his friends and wants nice clothes to go to a school dance, but he also knows that his family's financial circumstances mean that he has to make do with his mom's sewing. Also, he's gay and is looking for ways to come out to his friends and family. He is horrified when he does research and learns that there is no word in Vietnamese for gay, imaging the cultural implications of that idea. And matters are further complicated when a teacher tries to help him by referring him to a priest. 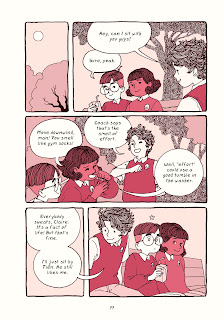 This book works in so many ways because it beautifully plugs readers into immediate experiences. Tiến is drawn to seem small and vulnerable, with his large, round eyeglasses, but he proves to be strong and resilient over the course of the book. When fairy tales are recounted, the drawings and colors become colorful and grandiose. There are exquisite gowns, stars, and sparkles that make things appropriately otherworldly. 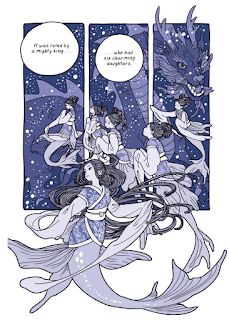 But in between this space of vulnerability/pain and magic/wonder, the characters communicate profound ideas and share feelings in a spectacular and unexpected fashion. This book is beautiful to behold in terms of artwork, but its plot is also splendidly moving, a tribute to the redemptive power of narrative. Its ending left me tingling.

This book's creator Trung Le Nguyen is also known as Trungles. The Magic Fish is his debut graphic novel, but he has drawn a number of fairy tale and romance comics for anthologies published by Oni Press, Boom! Studios, and Image Comics. He speaks about his work in this interview.

All the reviews I've read of this book have been glowing. Avery Kaplan wrote, "The Magic Fish is a book that exists between two points: fairy tales and personal experiences, Vietnam and the United States, mother and child, words and pictures, signifier and signified. It incorporates all of these elements into its whole, and rather than diminish any of them, the ultimate effect is to amplify them all." Kirkus Reviews gave it a starred review that concluded, "Beautifully illustrates how sharing old stories can be the best way to learn how to share new ones." Amanda MacGregor called it "beautiful and moving," adding, "this book will stick with me."

The Magic Fish was published by Random House Graphic, and they offer more info about it here.