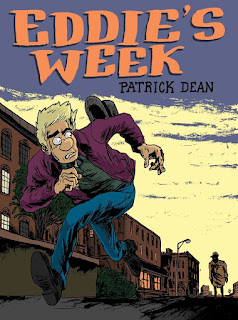 One of the highlights of every year for me has been the chance to go to HeroesCon in Charlotte to be a geek for a weekend, reconnect with friends, and check out a lot of excellent comics. Because of the birth of a child, I did not attend in 2019, and the 2020 con was cancelled because of COVID-19, so I have not been in a couple of years. But when I've been there I usually spend a good chunk of time hanging out with the author of Eddie's Week, Patrick Dean. Patrick lives near Athens, GA, and his strip Big Deal Comics was a fixture of the weekly Flagpole magazine. It was a weird, random, and hilarious comic where anything could and did happen, usually involving a ghost or a werewolf. During my time in Athens I got to know Patrick, too, through some mutual friends, and he is one of the kindest, sweetest, and funniest guys I know. His love for zany, old comics is palpable, as is his enthusiasm for making fun, inventive, and funny comics. Patrick was diagnosed with ALS in 2017, and he has not stopped drawing and fighting the good fight any way he can. His candor and dignity facing an impending decline has been inspirational and difficult to observe, though I admire his courage and marvel at the outpouring of love he has inspired from his friends and family.

Eddie's Week is the manifestation of all Patrick's attributes and abilities. Even ignoring the fact that the main character bears a strong resemblance to the author, reading this book feels like time well spent hanging out with my friend. This book's main character, Eddie Lubomir has a week off of work, which he intends to spend at home, watching cheesy movies and reading paperback novels. His plan gets complicated when he gets selected to take part in the Stay At Home Warden Project (S.A.H.W.P.) and has an inmate (complete with cell and nutritive food pellets) installed in his living room. 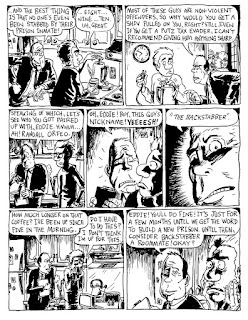 "The Backstabber" makes for interesting company, but Eddie's life becomes further complicated when he escapes. From there, Eddie runs into all sorts of strange characters, including a men's group who dress in bear suits, party magicians, a witch, vampire cops, and one very determined private investigator. The city of Tragoston is a weird and dark place. Every character in the book is vibrant and memorable, from the single-minded, oblivious head of S.A.H.W.P. to Eddie's ex-girlfriend Claire, who just can't seem to stay out of his business for too long. 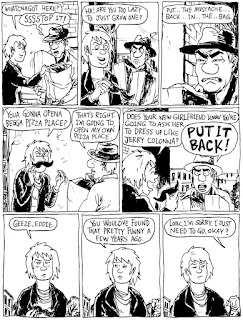 What makes this book really work is its idiosyncratic sense of humor. This world is one parallel to ours, replete with a menagerie of supernatural characters that act in mundane, grounded ways. The surreal nature of the plot and characters has the net effect of a grim sort of humor, a world where magic is possible and always at war with the random caprice of bureaucracy. This book is unique, personal, and hilarious in parts, commenting on the stultifying aspects of the "real world" but finding solace in unexpected relationships. The situations that Eddie finds himself in are madcap but also realistic in their impact, which makes this comic a singular reading experience. I really felt for Eddie as he went through his travails, although I also found myself fascinated by and laughing at all the nutjobs in his life. This book is original, gripping, and invigorating.

The reviews I've read of this book have been celebratory. Publishers Weekly concluded, "Though the leap from oddball nightmare into straight magic takes proceedings in an unexpected direction, for the most part Dean delivers a winningly comedic scenario. The result runs like Kafka as interpreted by the Three Stooges." Eleanor Davis wrote, "I’ve laughed loud and hard every time I’ve read it, and I’ve read it four times – and I love how the big weird mess of a plot somehow, against all odds, brings all its threads together like some sort of magic trick." Patrick speaks more about his work on this book in this interview.

Eddie's Week was published by Birdcage Bottom Books, and they offer a preview and more here. 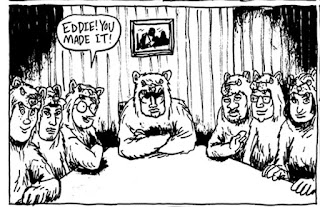