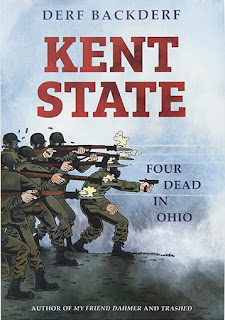 My Friend Dahmer is one of my all-time favorite graphic novels, a dark exploration of high school friendships and the many issues that underlie people's lives, which in the case of Jeffrey Dahmer resulted in horrific murder and mayhem. Derf Backderf's combination of autobiography and journalism made for a highly nuanced and haunting book that has stayed with me for years. Kent State: Four Dead in Ohio has a bit of autobiography at its beginning, when young Derf saw the National Guard rolling through his town on the way to Kent State, but its strength lies in its exhaustive research. This book focuses specifically on the four young people who died in the May 4 Massacre in 1970, putting a human face on history. Over the course of the book, I got to know these people, their friends, and their aspirations, and so when the gruesome events take place toward the end of the book, they feel even more tragic and pointless. 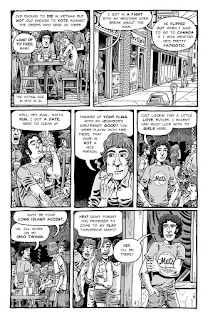 This book meticulously recounts the event that lead up to the massacre, and it is structured in four chapters to correspond to the first four days of that May. Piece by piece fall into place, from the "law and order" governor trying to show just how strong he is during an election year to the paranoid, draconian military leaders who headed the National Guard contingents to the exhausted and misinformed troops themselves. In hindsight, the massacre is made to look like a perfect storm, complete with misinformation, wild and untrue accusations made against the student protestors, and a culture war between liberal and conservation factions. The military action comes to be, ironically, as a result the fomenting protests against the increasingly unpopular and cruel military actions in Vietnam.

What is most informative and distressing about this book is the role that manipulating media and casting political aspersions played in the National Guard's actions, which is mirrored by contemporary protests and police brutality in Portland and other places. Acerbating the situation, government agencies and police planted spies and moles to make the protestors appear much more violent and extremist, just like today. The violent factions within the protestors are a minority, and do not reflect the whole, but they are attributed all sorts of (non-existent) power and agency. Rampant rumors among the local population and military/community leadership paint the students as communists and radicals. They say that the students have snipers and stockpiles of weapons. They dehumanize the students and their demands. It is depressing to see how much things have not really changed and how short we have come in the 50 years since these events took place.

I was impressed by just how much this book does. It portrays a set of individual portraits of the students, a history of the campus, and an account of the state of politics of the time on a city, state, and national level. There is a lot of information in this book, and most of it is presented in incredibly artful manner. There are a few pages that are text-heavy and more expository, but none of it is off-putting. And the pacing of the last chapter, where the shootings occur is paced to highlight its brutal, oppressive, and unjust aspects, is a clinic in storytelling an action sequence. The illustrations map not just the place but also the people and events in a visceral and incredibly moving fashion.

Reading this book, I could not help but also think of Big Black: Stand at Attica, which recounts events that happened at a prison uprising a year later, events referenced in this book's epilogue. Great books use history to illuminate the present, and that is exactly what Kent State does. Certainly it comes from a particular political viewpoint, but it is backed by a vast amount of research and personal accounts. And the facts (those that have not been obfuscated and lost) point to terrible and avoidable injustice and murder. Derf has crafted another masterpiece graphic novel.

In addition to the multiple award-winning My Friend Dahmer, Derf Backderf is also known for his long running alt-comic The City as well the graphic novel Trashed, about his time as a garbage collector. He speaks extensive about his work on Kent State in this interview.

All the reviews I have read of this book have praised it. It has received multiple starred reviews. The one from Publishers Weekly called it an "expertly crafted chronicle of this defining moment in U.S. history" that also "serves as a deeply moving elegy for the victims." The one from Kirkus Reviews concluded, "Backderf’s vivid, evocative book does a splendid job of keeping their memories alive." Leonard Pierce wrote, "By buying into the details so heavily, he makes a story that means something more today – and serves as a warning as we see the story repeated, again and again, every day, always as tragedy."

Kent State: Four Dead in Ohio was published by Abrams Books, and they offer a preview and more here.