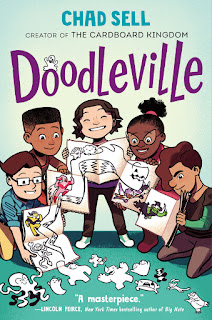 In part, Doodleville is a book about creativity and how it relates to people's emotions. Its protagonist is Drew, a young girl who loves to draw. What is more, her doodles literally pop off of the page and alter their surroundings. 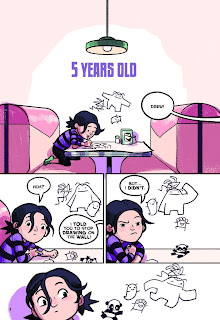 When she brings her notebook to the Art Institute of Chicago, her doodles run wild through the museum's various masterpieces, which especially upsets one curator. Also, one of her doodles steals a hat from a classical painting. 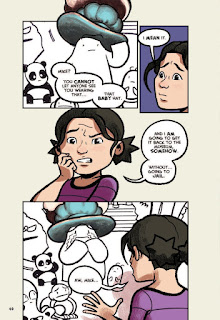 Another problem arises when Drew feels a sense of competition with the cool creations of her friends in the art club, and she tries to remedy the situation by drawing Levi, a leviathan creature she hopes will amaze them. When they don't quite get what she's trying to do with her creation, Levi manifests off the page in a disastrous way.

The various members of the art club all have their own characters, including superheroes, fantastical creatures, and animals, which unfortunately fall in Levi's path. A large part of the book is them planning ways to deal with the leviathan, which includes attacking it, trying to befriend it, and trapping it. But Levi proves almost impossible to deal with or contain. So in a manner, this book is also about how people learn how to relate to each other, which can be a messy and volatile endeavor.

I know that there are lots of cliches about the mental instability of artists, as it they need some sort of madness to fire their art, but this book does not really perpetuate that myth. Instead, the role of art here is to reflect people's emotional lives, and those of young people trying to find their way in the world can be tumultuous. Experimenting with identities and trying to fit in with friends can be frustrating, and that is part of what manifests in the children's drawings. I think this book is a highly respectful one, that takes children's mental states seriously and communicates just how complex they can be.

I appreciated how the artwork reflects these various struggles in interesting ways, and I also appreciated how these events are not tidily resolved at the end of the book. Also, on a positive note, the lack of resolution means that there will be a sequel set in this same beautifully rendered world.

Doodleville is the creation of Chad Sell, the artist who collaborated with a number of authors on one of my favorite graphic novels of recent years, The Cardboard Kingdom. This book continues in its vein of respectfully representing the diverse, complicated lives of children. Sell provides lots of insight into his work on Doodleville in this interview.

All of the reviews I have read about this book have been positive. Kirkus Reviews summed up that this book "will draw readers in and inspire doodles galore." Publishers Weekly wrote, "Sell’s caricatured illustrations provide strong action, and single-hue overlays (purples, greens) highlight emotionally charged moments for the friend group, which includes kids of various ethnicities and gender identities." Charles Hartford wrote that it has "the perfect balance of seriousness and fun."

Doodleville was published by Random House Graphic, and they offer a preview and more here.