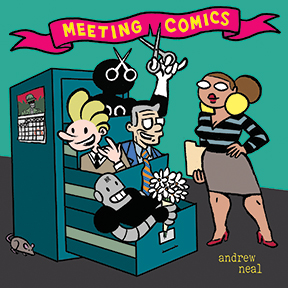 There are plenty of comics set in workplaces, but none, for my money, is as funny or consistently excellent as Meeting Comics. These comics are published three times a week online, originally on Instagram, but now exclusively via Patreon. They are collected bi-monthly into mini-comics/PDFs, and they are currently up to #17. This book collects the first six issues, a whole bunch of comics that show the progress of the series. At first it is more sketchy with each comic literally drawn over a lunch break, but later entries are more more polished and feature recurring characters. 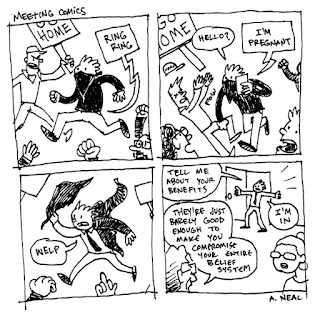 Over time, we come to know Kevin, the radical guy in that cartoon above, and he is sort of the moral center of the book. Other characters include the human resources robot (literally) Rob, the office queen/diva Val, aged boss Don (who once starred in a sci-fi/action TV series Namdroid as a younger man), and Thomas, who seems milquetoast but leads a double life as the vigilante known as Ribbon Cutter. They are a diverse cast, in multiple sense of the word, and watching them play off of each other is a delight. 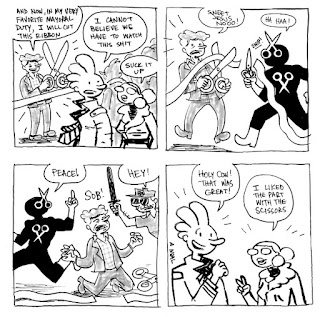 The humor in this series is random, sometimes topical, sometimes political, and often laugh-out-loud funny. I love how over time the characters grow and we learn about their quite complex and surprising back-stories. Along with the workplace humor, there is also a healthy dose of mature themes, including sex, drugs, and profanity, but I feel all of it contributes to making these bombastic, silly characters all the more human and relatable. Like all good comic strips, this one features real life dialed up to the extreme, but it has a lot of heart, and it's easy to fall in love with these folx.

Meeting Comics are written and drawn by Andrew Neal, former comic shop employee/owner and current comics creator. He speaks extensively about his work on Meeting Comics in this interview (with my friend, Craig Fischer. Hi Craig!).

I have not be able to find many reviews of this book, which is a criminal shame. The ones I have seen have been extremely positive though. Chris from Zine Cuisine called it a "personal fave." Goodreads currently has it rated 4.5 (out of 5) stars.

Meeting Comics was published by Adhouse Books, and they offer a preview and more here. You can check out the further adventures of these characters via the official page or by subscribing to Neal's Patreon (like I do!). Some of the later strips are also serialized in SOLRAD.

Posted by Stergios Botzakis at 11:53 AM