2020 has been a long, distressing, and memorable year. It was also a year full of some great comics and graphic novels, particularly nonfiction works. Check out this list of my favorites (and follow the links to the full reviews):

I am a sucker for an inspirational sports story, and Dragon Hoops is that, plus a personal history, plus a look at the identity politics of high school students, plus a commentary on making comics, plus a meditation on balancing your life. It's a massive, incredible work.

Kurt Vonnegut is one of my favorite authors, and this adaptation of Slaughterhouse-Five uses comics in interesting and innovative ways. Most adaptations don't enhance the source material, but this one does.

I have liked all the entries in the History Comics series I have read thus far, but the scope and sense of humor of this book make it exceptional. The Roanoke Colony tells the tale of Native Americans, colonial America, a doomed colony, British royal politics, and pirates. I learned so much from reading it and had fun doing so, too. (Queen Elizabeth I brushed her teeth with honey, can you believe it? Disgusting!) 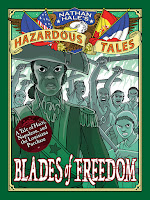 Nathan Hale makes the best history comics, so he gets his own category. Blades of Freedom, the tenth(!) entry in his Hazardous Tales series, shows just how fresh and interesting his work still is while covering a topic (the slave revolt in Haiti) that unravels a complicated web of 18th century US and European history. Another book that opened my eyes to a topic I was sadly ignorant about.

Kent State is well-researched, based on lots of original documents, interviews, and oral accounts of the massacre of student protestors in 1970. It is a book that highlights the victims who died, showing their humanity while also exposing a system of paranoia and prejudice that sadly persists today.

Not much is known about the private live of this pivotal actor, but Lon Chaney Speaks pieces together a compelling narrative that melds vaudeville, silent movies, the early days of Hollywood, and plenty of monster movie special effects. The artwork perfectly captures the time period while recreating the movies and movie posters of the day.

I know that Jack Kirby is not technically a superhero, but he created enough of them in his lifetime that I am counting him as one. I loved this biography that covers his lifespan and accomplishments in a style very similar to his own. The artwork is bombastic, quite fitting for the "King of Comics."

One of the highlights of my year was getting to talk with Gene Luen Yang about Superman Smashes the Klan. Even if I had not talked to him, I would rate this work very highly. Based on a serialized radio show from 1946, this book modernizes the tale and hits on the best aspects of the classic superhero while also commenting on racism and the resilience of immigrants.

There are two books in the Investigators series so far, and my oldest child has read them with me multiple times. It's full of puns, cheesy jokes, and inventive mash-ups of characters (including a radioactive bakery-based villain named Cracker-dile, a plumber who literally has a snake for an arm, and a doctor who turns into a news copter when anything news-worthy occurs around him). Fun and addictive!

Eddie's Week begins with the main character having an inmate (complete with cell) installed in his living room and just gets weirder and more surreal from there. It's a unique and darkly funny book that speaks about modern life wile containing some madcap adventures.

A beautifully told and illustrated book, The Magic Fish speaks to the power of stories to convey meaning and build brides that cross time and culture. The main character Tiến is one of the sweetest and most sympathetic protagonists, and his struggles with coming out to his parents gnaw at him. The ending left me tingling.

Even though I come from a very different background than Joel Christian Gill, I found much to relate to in this autobiography. Fights chronicles a rough childhood where he had to learn to take up for himself, often in physical ways. It's a heart-rending and inspirational work that captures the confusion and ambiguities of childhood.