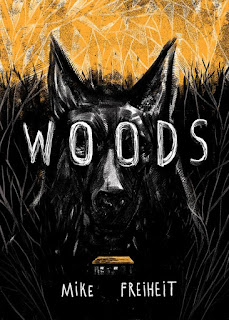 Woods is a book I picked up from the same Kickstarter campaign I got Eddie's Week. I had really enjoyed the author's prior book Monkey Chef, and I was eager to see what his new work was like. Whereas that book, and most of Mike Freiheit's other comics work has been autobiographical, this book is a work of fiction. Woods is one of the creepier books I have read of late, and I mean that as a compliment. It's a subtle horror story that combines current events with mental health concerns, mixed with some basic archetypes of scary fiction.

The main characters in this book are Jason and Beth. Beth experiences a mental break after the presidential election of 2016, paranoid about the state of the world and the hate/misogyny she sees everywhere. After convalescing, she and her husband Jason decide to sublet their apartment and move to a cabin in the woods. Jason has a dark complexion (and is meant to be African-American, I think, though it's not explicitly stated), which brings him unwanted attention from the rural locals. They make "jokes," but they also seem menacing.

All of these aspects coalesce into a terrible scenario. Jason begins to suspect slight instances of sabotage to their land. Beth may or may not be taking her meds faithfully, or perhaps they are not effective. Add to this mix a cold winter, a faulty generator, and an unreliable truck, and what you have is a horrific scene. 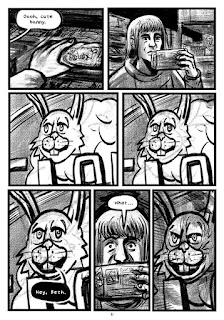 What I admired most about this book was how it establishes a tone of unease and terror through it's raw-feeling artwork and small cracks in the veneer. Beth's descent into paranoia is at once slow and then sudden, and the clues have been dotted along all the while. The artwork indicates these shifts with its use of black and white and a spectrum of lines that run from relatively smooth to more frenetic and jarring. The ways that the local animals are depicted in the background, environment, and also interacting with the main characters add nuance and menace. Overall, I think this book is very effective in creating an ominous tone that touches on horror both in contemporary and classic ways.

The reviews I have read about this book have been positive. Publishers Weekly wrote that he "achieves a claustrophobic sense of threats from both inside and out. Freiheit disconcertingly draws readers into paranoia in this cooped-up cabin fever–dream." John Seven stated, "Freiheit’s artwork in Woods mirrors the frantic nature of the situation the couple is in — stark black and white, sometimes scratchy as if the sanity of the panels are fraying along with Beth and Jason’s perception of the world around them." Ryan C. wrote that "this book excels at making you think. About where we are as a society, how we got here, how or even if we can possibly get out."

Woods was published by Birdcage Bottom Books, and they offer a preview and more here.