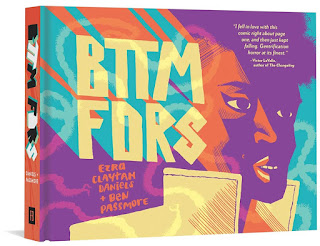 BTTM FDRS is a complicated, thought-provoking, and entertaining book that melds social issues with a horror story. Its protagonist is a young black woman named Darla, who has graduated art school and is trying to break into the fashion industry. She moves into a building in "the Bottomyards," a fictional section of Chicago that was once a thriving community but is now a burnt out shell of dilapidated buildings and poverty. It's the perfect place for bohemian, artsy lofts, and when Darla moves in she is accompanied by her opportunistic, trendy, white friend Cynthia. While in this building, they meet a Latinx DJ named Julio, who ironically dresses up and performs as a pilgrim under the name Plymouth Rock. Darla also encounters a worker from the electrical company who is paranoid about an invasion of reptile people and also bent on solving the mystery of why the building manages to power and heat itself without drawing on any outside utilities. That's when they discover what lives in the plumbing/walls, and the whole enterprise turns into a sci-fi/horror show.

My description of this book does it no justice, because it's got so many disparate aspects going into the plot. What does stand out to me are a few things: 1) The genre aspects of horror and sci-fi play out in suspenseful and delightfully gruesome ways. 2) There is plenty of overt and subtle exploration of how multiple identities are employed, exploited, and co-opted in terms of popular and everyday culture. 3) The characters are complex and interesting. 4) The artwork highlights the horror with detailed, grotesque creatures and unreal coloring. 5) After about 50 pages in and some basics were established, this book turned into a page-turner I could not put down.

BTTM FDRS is an excellent book that can be read as an action-thriller, but it's also a smart commentary on contemporary racial, gender, and class issues. It's the best kind of sci-fi: a fantastically entertaining work that makes you look at the world from different angles.

This book is the creation of writer Ezra Claytan Daniels and artist Ben Passmore. Daniels has worked in multiple media and is probably best known in comics for his Dwayne McDuffie Award for Diversity in Comics-winning Upgrade Soul. Passmore is known for the Ignatz Award-winning comic Your Black Friend, as well as Sports is Hell, DAYGLOAHOLE, and his regular contributions to The Nib. Both creators speak about their collaboration on BTTM FDRS in this interview.

All of the reviews I have read about this book have been positive. Philippe Leblanc declared it "one of the best graphic novels I read in 2019... a thoughtful meditation on not just gentrification, but inequality." Alex Hoffman wrote, "With its biting social commentary and fascinating worldbuilding, plus Passmore’s vibrant illustration and otherworldly colors, BTTM FDRS is the book of the summer. An absolute must read." Austin Price called it "a delightfully and rightly angry polemic," though he was disappointed by its lack of scope.

BTTM FDRS was published by Fantagraphics, and they offer a preview and more here. It is also available on Comixology Unlimited, which is how I read it. It features mature themes, violence, and horror scenes, so it is recommended for mature readers.