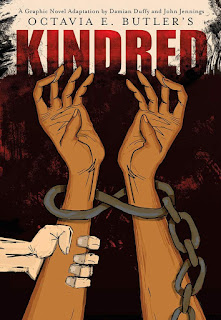 I have never read the novel Kindred, so I cannot really compare this version to the original, but I can say that after reading this adaptation I really want to check it out. The story focuses on Dana, a black woman from 1976 who is suddenly, mysteriously thrown into the past where she rescues a little red-headed, white boy named Rufus from drowning. 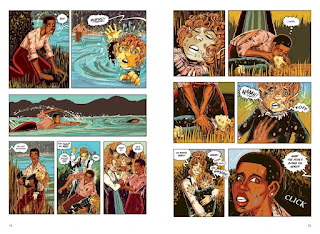 It turn out Rufus is actually one of her ancestors, the son of a slave-owner and a future slave-owner himself, and somehow her fate is tied to his. Stuck in the early 1800s in rural Maryland, Dana finds that she has to make a lot of compromises in order to survive in a place where slavery is not only legal but the guiding force of society. Dana ends up returning to the present, but she bounces back and forth in time a few times over the course of the story, finding that months spent in the past only add up to hours or days in the present. Each time brings different revelations, emotions, violence, and consequences.

What makes this book especially powerful for me is how it engages with the conflicting views of the past and present. Having to make do in the past, Dana learns the absolute horrors and terrors of slavery. She sees firsthand how ugly and dehumanizing it was, and she also sees just how strong and stoic many of her forebears had to be in order to survive. Her modern sensibilities are profoundly affected by her sojourns into the past. This book is a harrowing and traumatizing one, and not one I will soon forget. I think that the illustrations and pacing make for compelling reading, and they also capture the horrible aspects of slavery and racism in visceral ways. It was riveting and also repulsive, a work that is challenging in the best sense of the word.

This book is based on an original text by Octavia Butler, a Hugo and Nebula Award winning writer who was inducted into the Science Fiction Hall of Fame. This adaptation won the 2018 Eisner Comics Award for Best Adaptation From Another Medium, and it was created by writer Damian Duffy and artist John Jennings. These frequent collaborators also have adapted another Butler novel Parable of the Sower into graphic novel form. Both creators weigh in on their work on the Kindred adaptation in this interview.

All the reviews I have read of this book have been positive. Shawn Taylor gushed, "Not only is this one of the very best adaptations of an existing work, ever, but one of the best graphic novels in twenty years." John Denardo opined "Duffy's adaptation perfectly captures the horrific situations forced on the lives of black people in the pre-Civil War South and conveys the emotional impact of Butler's work." Publishers Weekly wrote, "It’s an effective recap, clearly produced with great love and respect, but the book remains the gold standard."

Kindred was published by Abrams ComicArts, and they offer more info about it here. It's also currently available on Comixology Unlimited, which is where I read it.