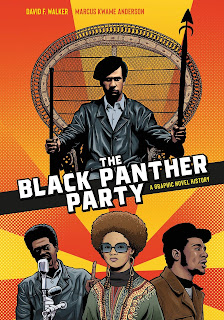 Reading this book showed me how little I actually knew about the Black Panther Party. The Black Panther Party: A Graphic Novel History is not a long book, but it is substantive and comprehensive. It touches on every major figure associated with the BPP, and heavily focuses on the pivotal years of 1967 - 1969. There are spotlights on people like Huey P. Newton, Bobby Seale, Fred Hampton, and Angela Davis as well as gripping, suspenseful portrayals of major events in the formation and social actions taken by the Black Panthers. 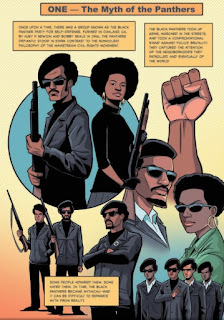 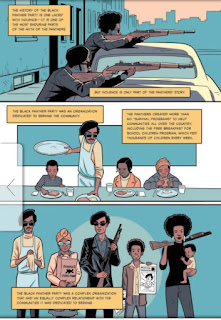 As you can see from the excerpt above, this book is about detailing the history of this group and also placing it in the broader context of US and civil rights history. It is one of the more information-rich graphic novels I have read, but it balances exposition with dramatic action scenes. It utilizes dynamic, iconic artwork full of bold imagery. I appreciated how well it captures both realistic depictions of the participants as well as a sense of the propaganda/visual messages broadcast by the BPP. Even in the passages that are more text heavy and dense, the images are vibrant and realistic, adding much context to the proceedings.

As a common theme with other books I've read recently, like Big Black: Stand at Attica and Kent State, this book shows how US society has not progressed as much as we would like. The Panthers arose in a response to the racial violence being perpetrated by police forces. Their militaristic response was to show that they could not simply be intimidated and pushed around any more. This arm of the movement was coupled with more charitable ones I did not really know about, such as establishing a school and a program for feeding the hungry, though those aspects are largely overlooked today.

A sizable amount of the book is also devoted to J. Edgar Hoover and the FBI's many incredibly shady and illegal methods of infiltrating the BPP, sowing discord, and outright murdering some of its leadership. I know that not everyone approved of the methods for seeking equality, even within the various civil rights movements of the day, but the level of subterfuge and sabotage accounted here is shocking. I think this book is the perfect introduction for someone who knows nothing about the Black Panther Party, and an excellent resource for any US history, government, or language arts class studying African-American history or civil rights.

This book was created by writer David F. Walker and artist Marcus Kwame Anderson. Walker is a prolific author and is best known in comics for his work on the Eisner Award winning series Bitter Root, runs on Marvel series such as Luke Cage and Power Man & Iron Fist, and the DC Comics series Naomi. He has also written another nonfiction graphic novel, a biography of Frederick Douglass. Anderson is best known for his creator owned series Snow Daze and has also illustrated a number of projects for Action Lab.

All of the reviews I have read of this book have been very positive. In their starred review, Publishers Weekly concluded, "This concise yet in-depth guide offers a timely resource for activists, history buffs, and students alike." Ed Park called it "ambitious and informative." In a rollicking review, S.W. Sondheimer wrote, "I learned more from this 98-page graphic novel history than I did from Chernow’s 818 page biography of Hamilton or anything I had to read for my college course on the WWII Pacific theater."

The Black Panther Party was published by Ten Speed Press, and they provide a preview and more here.