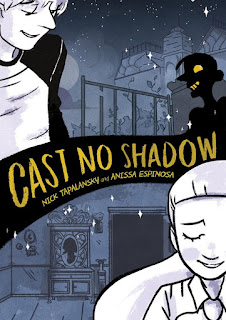 The protagonist of Cast No Shadow is a slight high school student named Greg, and he has a few very relatable circumstances. He is dealing with the loss of his mother, who died a few years ago. He is uncomfortable with his dad's girlfriend moving in with them. His best friend Layla has always had his back, but lately has a crush on Jake, a really popular kid who used to torment Greg when they were younger. Jake keeps wanting to hang out with Greg, calling him "little buddy," which annoys him to no end. And they all live in a small town full of tourist traps, the latest of which is the largest hairball in the world.

All of these features are pretty normal for adolescents to deal with, but Greg is not exactly normal. He was born without a shadow, which might not seem like the most ground-shaking condition, but it does mean that something is different about him. What it seems to be is that he is somehow able to see ghosts, especially the one of Eleanor. She is a poltergeist who scares people away from her abandoned house, but she and Greg hit it off, becoming romantic. So Greg and she spend a lot of time together, which sets off something sinister within Greg that ends up threatening the entire town. 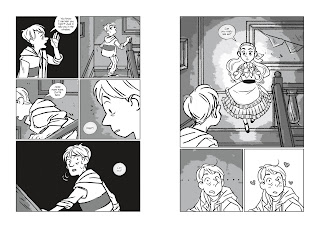 I am not going to spoil much more, because I most of the fun of this book lay in its gradual reveals along the way. I will say though that I felt this story was very engaging and interesting. There was a lot more showing and not telling at the onset of the book, which made making sense of the dual narrators a real mystery. However, as the plot got toward the end, there was a lot of information dropped in quick fashion that made for a bumpy ride. Still, I loved the artwork and characters. They were portrayed in a cartoonish manner, but still are very realistic and nuanced. In the end I was enchanted by the internal logic of this storyworld, with its unique take on ghosts and the afterlife. The ending may seem cheesy to some, but I liked this cheese very much.


Cast No Shadow was a collaboration between writer Nick Tapalansky and artist Anissa Espinosa. Tapalansky has a few other graphic novels under his belt, including A Radical Shift of Gravity, Samantha Loring and the Impossible World, and Awakening. This book is Espinosa's first graphic novel, though her work has appeared in a number of comics anthologies.

The reviews I have read about this book point to its strengths but also its hiccups. Dustin Cabeal summed up, "The story and art stumble in places, but ultimately find its way and presents a story that I enjoyed reading as an adult, but one I would have loved to have read as a child." Publishers Weekly concluded that "although Greg’s lingering pain over his mother’s death is keenly felt, the mysteries surrounding Nick’s shadow and Eleanor’s past are inelegantly and confusingly addressed in rapidly deployed info dumps, leaving the conclusion rushed and unsatisfying." Kirkus Reviews tersely summarized it as "Engaging but not without flaw."

Cast No Shadow was published by First Second, and they offer a preview and more info about it here.

A preview copy was provided by the publisher.
Posted by Stergios Botzakis at 12:00 PM