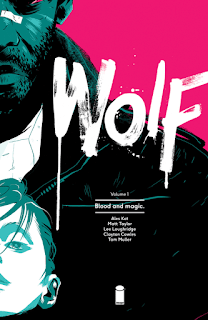 Wolf is a detective book that has a lot going on, including a number of supernatural elements. The book's protagonist Antoine Wolfe is seemingly immortal. He is hired by an incredibly rich, racist, and crooked businessman to retrieve an adolescent girl who may be the antichrist. His best friend is a tentacle-faced demon straight out of the chronicles of Cthulhu. He also runs afoul of criminal vampires, multiple ghosts, apparitions, and spirits, not to mention a werewolf, too. 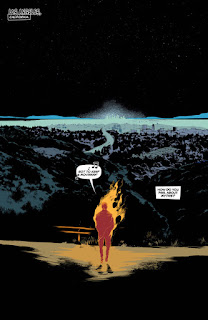 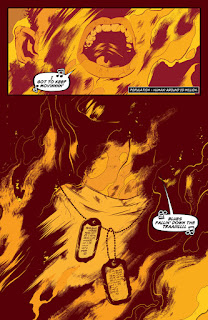 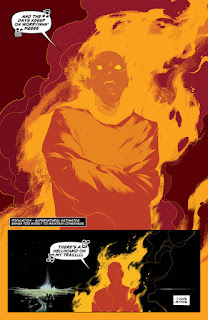 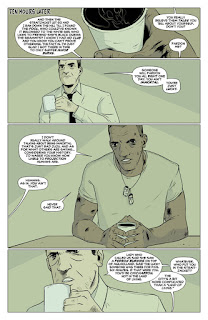 This book features many of the conventions of noir books, including a hip narrator, lots of double-crosses, shady characters who are up to no good, and revelations that complicate everyone's lives. I quite enjoyed reading this book, even if it was not the most ground-breaking kind of story. Some clever plot twists and novel interpretations of classic monster tales helped, as did the expressive and creepy artwork. The coloring is especially exceptional, as you can see from the excerpt. If you are a fan of noir detective tales with a dash of supernatural mayhem, this is a book for you.

Wolf is the creation of writer Alex Kot and artists Matt Taylor and Lee Loughridge. Kot has worked on a number of works from comics to video games for multiple companies. Taylor is a commercial artist and comics creator with a number of credits. Loughridge is a colorist who has worked on many Batman titles as well as some indy works like Deadly Class and Southern Cross. Kot speaks at length about his work and inspirations on Wolf in this interview.

The reviews I have read of this book have mostly rated it as solid, if not spectacular. Peter Marinari enjoyed it very much, stating, "Kot and his collaborators have conjured a bit of true magic with this ouroboros of a tale that forced me to pick it up for a re-read just seconds after I finished." Kieran Fisher liked it fine and opined about the series, "It’s not quite perfect yet, but it’s certainly headed in that direction." There are also a number of reviews of it on Goodreads, where it has an aggregate 3-star rating.

Wolf is published by Image Comics, and they have a preview and more information about the series here. I borrowed this volume using Comixology Unlimited service, and it is intended for mature readers.
Posted by Stergios Botzakis at 12:00 PM