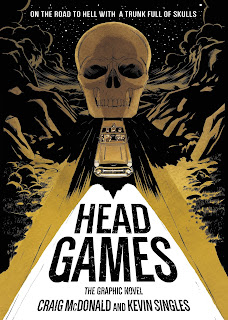 A graphic novel adaptation of an Edgar-nominated novel by Craig McDonald, Head Games follows the exploits of Hector Lassiter, a fictional pulp novelist and adventurer who seems to find himself constantly in interesting, difficult spots. At the beginning of this book, he happens into possession of Pancho Villa's skull, which brings him all sorts of unwanted attention. There are treasure hunters who want it for a map that is supposedly hidden in/on it. There is the mysterious Skull & Bones Society who want it for their collection. There are shady businessmen, federal agents, and collectors who either want it for their own or to auction it off to the highest bidder. And all of these groups are not afraid to get rough or murder in order to get it. 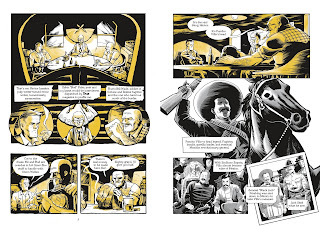 Along the way, he falls in with poet/journalist Bud Fiske and the haunted, feisty actress Alicia Vicente, and together they dodge lots of adversity and peril. At the time of this book, Lassiter is more like a lion in winter, but still he is quite capable and athletic. His status sets up a hearty context for self-exploration, rumination, and reflection, and there is lots of personal drama to go along with the high adventure. Also, there are a bunch of cameos from famous people of the period, including Orson Welles, Ernest Hemingway, Marlene Dietrich, and even a young George W. Bush.

I am a big fan of books like this one and am particularly fond of the adventures of Travis McGee and Parker, as well as pretty much anything by Max Allan Collins or Lawrence Block. As it is, this volume is a thrilling tale that stands on its own, but I would love to see how other volumes in the series could follow in its wake. I know that this book is technically the 7th in a series of 10, and, without spoiling things, I was a bit shocked and amazed by how it resolved. I hope this book sells like hotcakes, because I really want to follow Lassiter's exploits in graphic novel form. I'm already adding the novels to my ever-growing to-read list.

The two people behind this adaptation are Kevin Singles and Les McLaine. I was not able to locate much info about Singles, but I do know that this book is his graphic novel debut. McClaine is a veteran of comics and animation, an Eisner Award nominee, and is best known for drawing the series The Middleman and the webcomic Jonny Crossbones.

All of the reviews I have read about this book have been positive. Publishers Weekly called it "a breezy thriller designed to hit the sweet spot for crime fans and history buffs alike." Pharoah Miles summed up, "Overall, it feels like those old pulp novels that Robert Parker and Dashiell Hamlett used to write, a time capsule of very different men and women." Maite Molina wrote that it has "plenty of action and humor to keep you engaged from start to finish." Tom Batten proclaimed it "Good fun for fans of pulp, crime, or historical fiction."

Head Games was published by First Second, and they offer a preview and much more here. I don't think this book would appeal to younger readers, but I should add a small caution that it contains violence and some brief nudity.