The Creeps Book 3: Curse of the Attack-o-Lanterns 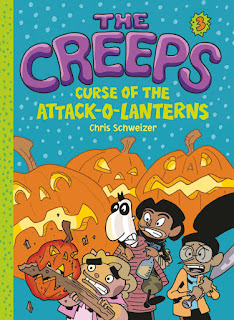 This third book in The Creeps series (I reviewed the first two books here) caps off their adventures. In this volume, our quirky quartet finds themselves up to their eyeballs in trouble again (with the local authorities as well as with a new supernatural menace). They not only have to deal with service detention, they also have to contend with an ages-long curse, a modern day witch, an unlikely romance, and murderous pumpkins with deadly bites. 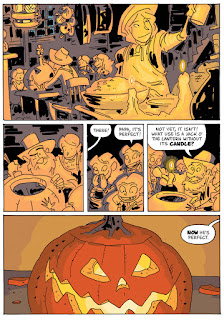 Like the other books in the series, this one was delightfully gruesome, with some legitimately horrible and scary moments. Also, it rewarded astute readers of the first two books, using many established character traits and situations from those books to pay off in some very touching, human moments as well as great jokes and dramatic scenes. This book features masterful storytelling as well as some masterful comics making.

This book was also the creation of Chris Schweizer, an impressively talented comics creator who has been nominated for multiple Eisner Awards and is well known for his work on the  Crogan's Adventures. Currently, he is providing the colors for Rock Candy Mountain, an action series about hobos in post-World War II America. He talks extensively about his work on The Creeps books in this interview.

I was unable to locate reviews for this book, which I think is somewhat strange and unfortunate because this book is at least as good and enjoyable as the second book, The Trolls Will Feast. That book had a much more inventive villain, though I feel this book has a more intricate and complex plot. It does have a four star rating on Goodreads, and there seem to be at least of couple of reviews here as well, though they are behind a pay wall.

Curse of the Attack-o-Lanterns was published by Amulet Books, and they have a preview and more here.

I tracked Schweizer down at HeroesCon this past year, and he was a swell guy who was also kind enough to sign and draw a little sketch in my copy: 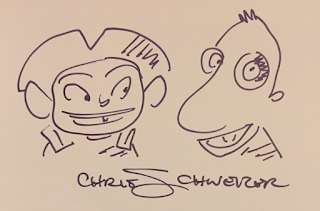 Thank you!
Posted by Stergios Botzakis at 12:00 PM