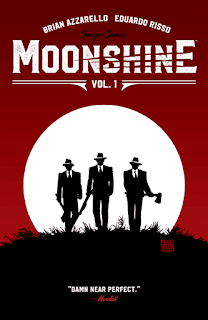 Moonshine is a high concept series, a period piece comic with lots of horror aspects. The main plot deals with the Mob in 1920s New York City seeking to get a supply of choice moonshine for its nightclubs. The source they seek is Hiram Holt, a scarred patriarch who defends his property with extreme prejudice against anyone who threatens him. That includes snoops, thieves, and even federal agents. What is more, he has at least one large, furry, ravenous, and viciously powerful creature at his disposal. 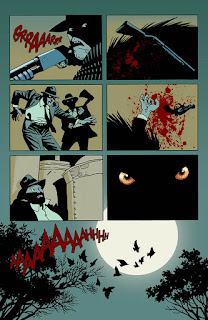 Lou Pirlo, a gangster with an appetite for vice, is sent down to persuade Holt to sell his liquor to be distributed in New York City. He does not exactly fit in in rural Appalachia, West Virginia to be specific, which leads to some incidents. Also, he does not exactly get on well with Holt, but he does end up making a deal with his children, which rains down some pretty dire consequences. One of Pirlo's vices is an eye for beautiful, dangerous women, and he finds two that fit that bill. One seems to want to help him, and the other appears to have more sinister motives. 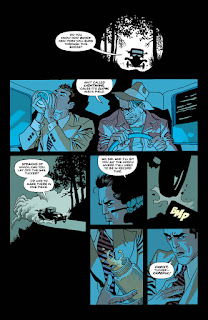 This book is full of bloody violence, double crossing, and murder, and the supernatural elements add a degree of heightened menace to the noir setting. I also very much appreciated the unresolved mystery behind the identity and intentions of the wolf creature (creatures?). This book ends on a quiet note after a huge confrontation, but it also left me yearning to see how certain events will resolve. Also, it does not hurt that the artwork is phenomenally executed, with strong lines and many cutting figures.

The duo behind this book are writer Brian Azzarello and artist Eduardo Risso. The pair collaborated on the long-running and influential comic series 100 Bullets, which won multiple Eisner and Harvey Awards. Azzarello has also written a number of other comic series for DC Comics, most notably Batman and the New 52 version of Wonder Woman. Risso has also worked largely at DC, on many books with Azzarello. Both creators speak about their work on Moonshine in this interview.

The reviews I have read have been mostly positive, with minor quibbles about the general pacing or the use of accents. Chris Tresson opined, "It was slow, but a good kind of slow." Sam Wildman wrote, "It’s a well written book with fantastic artwork that brings Brian Azzarello and Eduardo Risso back together to tell an intriguing story of werewolves and bootleggers. Despite the somewhat slow build up, it has a satisfying conclusion and really makes me believe in the potential of future story arcs." Benjamin Bailey encouraged people to "buy this book to see Risso unleashed and creating some of the finest pages he’s ever crafted."

Moonshine Volume 1 was published by Image Comics, and they have a preview and more information about the series here. This book collects the first six issues of the series, which is still ongoing.

This book features a lot of violence, some nudity, occasional profanity, and adult themes, so it is suggested for readers mature enough to handle those things.
Posted by Stergios Botzakis at 12:00 PM