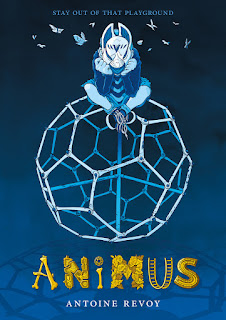 Animus is an enjoyably creepy book. The story revolves around a playground that is somehow involved with the disappearance of multiple children in Kyoto, Japan. We gain entrance into this world via the actions of two youngsters, Hisao and Sayuri, who meet a fox-masked ghost named Toothless. This weird being tells them all about some of the features of the playground, which include mystical slides, monkey bars, statues, and sandbox. I won't spoil things by revealing their specific properties, but playing on and in those places leads the children on some pretty eerie, fantastic episodes. Along the way they get more clues about why the various children are disappearing. Things take a sinister, personal turn when one of their friends vanishes, and they gain a real sense of urgency to solve the origins of Toothless and the playground in order to save him. 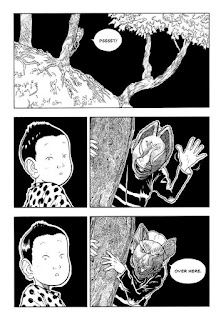 I must say, I really did not see the ending coming. This book is both a homage to manga and inventive and entertaining in its own right. Additionally, it is complex and holds up well to rereading, and I highly recommend it.

This book's creator Antoine Revoy is an instructor at the Rhode Island School of Design, and this book is his graphic novel debut. He has worked as an illustrator and animator, and has led an interesting life. He was born in France, raised in Japan, and now is located in the US, and all of these various influences crop up in his gorgeously composed, darkly atmospheric artwork and intricately crafted narrative. He speaks about his work on Animus in this interview.

All of the reviews I have read of this book have been positive. Kirkus Reviews summed it up, "An eerie graphic novel mystery that is bewildering and unnerving in the best way possible." Todd Young wrote, "I appreciate the author’s ability to keep me thinking about the story long after I finished it." Publishers Weekly added, "Revoy’s otherworldly adventure moves quickly, but his succinct storytelling keeps readers on track with essential details."

Animus was published by First Second, and they offer a preview and more here. There is also an official website for the book here.