Dawn and the Impossible Three 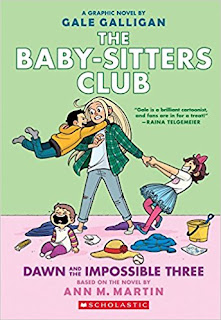 Fun fact: This is the first Babysitters Club graphic novel I have ever read, which is weird considering how popular they are and how instrumental they were in also launching Raina Telgemeier's career. Going further, I don't think I've ever read a Babysitters Club novel either, even though they were ubiquitous when I was growing up. I always felt that they must be formulaic crap, but boy was I shocked by how much I liked Dawn and the Impossible Three.

This book, which is also a finalist in the Middle Grades category for the Excellence in Graphic Literature Awards, follows the exploits of Dawn, the newest member of the eponymous club. She is new in town, having just moved from California. She has difficulty adjusting to the New England locale, dealing with her mom's dating, and also juggling the interpersonal relationships of the club. To top things off, she ends up babysitting frequently for the Barrett family, an undertaking that gets complicated by the mom who is struggling to be a single parent in terms of managing her children and a household. There are many serious, real-life issues at play here, and they offer real stakes that propel the narrative in strong directions. 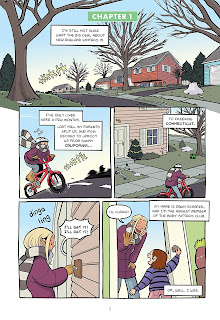 Over the course of the book, Dawn learns much about personal boundaries, how to communicate with others, and in general about being a mature person. What is more, I felt that the characters and situations were complex and all treated with dignity and care. I definitely went into this graphic novel expecting some generic claptrap but instead I found myself reading a very evocative and affecting book. I will definitely be checking out some of the other books in this series.

This book is Gale Galligan's debut graphic novel, but she has experience as a production assistant on a number of other books like Teen Boat!, Astronaut Academy: Re-Entry, and Drama! She speaks about her work on this book in this interview.

All of the reviews I have read about this book have been positive. Kirkus Reviews called it "A worthy addition to the series, albeit a bit more somber than its forerunners." Johanna Draper Carlson wrote that Galligan has "got a good sense of storytelling." Kathryn White summed it up, "Great fun for BSC fans new and old. Highly recommended."

Dawn and the Impossible Three was published by Scholastic, and they offer more info about it here. Galligan is working on the next entry in this series, Kristy's Big Day, which is expected to be published later this year.
Posted by Stergios Botzakis at 12:00 PM