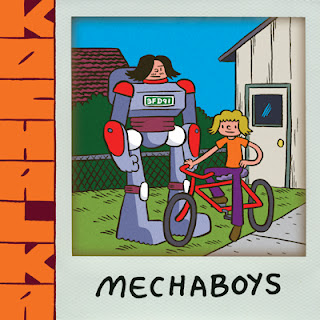 I have stated before that James Kochalka's work is hit or miss for me. There are some books I have really enjoyed, like Monkey Vs. Robot, the first two Johnny Boo books, and Superf*ckers. I also respected and mostly appreciated his long running American Elf webcomic, too. Still, there are some of his works that I pretty much despise, like the later volumes of Johnny Boo or the first Glorkian Warrior book. Still, the man was named cartoonist laureate of Vermont, and I feel his best work might be the adolescent superhero angst-fest Superf*ckers, so I gave this book, which has a high school setting, a shot. In the end, I feel it may have crystalized my feelings toward his work: there were parts of it I liked and parts of it that left me perplexed and cold.

Mechaboys is another sideways tale of adolescent angst and intrigue. It stars two friends named Jamie and Zachery who build a mechasuit out of lawn mower parts. They are not very popular, and are often the butt of jokes and bullying by larger, more athletic boys named Truck and Duck. They plan to use the suit to gain some level of respect, by somehow pushing back against the bullies. I feel that this book is strongest when it explores these teen's relationships with each other and the various high school cliques. Also, these interactions are the source of much of the book's heart and humor. The school setting also has its share of positive bits, such as the boys' antagonistic (in more ways than one, it turns out) relationship with their PE teacher Mr. B. 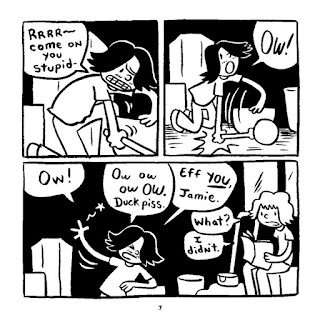 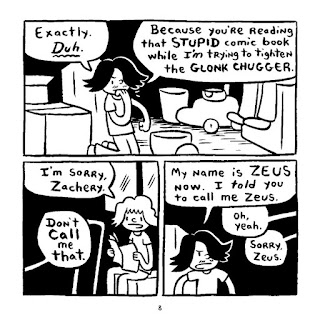 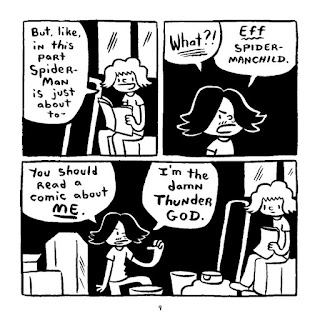 Once the duo successfully test-run the suit, Zachery jerk-factor gets dialed to 11 and he gets a little drunk on the power, insisting on being called Zeus. Jamie seems a little more socially well-adjusted, perhaps because he has a potential girlfriend he keeps talking to. However, the entire enterprise takes a dark turn toward the end when Zachery hatches a plan to kill everyone at the prom using the mechasuit. That last sequence where the plan is enacted is a bit troubling for me. First off, the set-up makes the stakes very high, and the fictional context takes on some real-world import. After all, school shootings are horrific and all-too-frequent in the US, and I feel that Kochalka strongly portrays how such a plot might be developed by disaffected teens. The tale does not sugarcoat that reality on the front end, but the plan takes a farcical turn that defuses any of that horror and potential commentary or exploration. Instead, the proceedings devolve into slapstick, and the book becomes very light-hearted, tending toward the ridiculous.

I do not know how quite to feel about that conclusion, like the story is chugging along toward some dark place but suddenly ends like a sitcom episode with a lesson in learning about oneself and others. It just seems disingenuous to me, especially given the character work that set up the whole scene. Perhaps Kochalka just wants to make silly comics, but the topic of school violence and murder seems a weird one to mine for humor, especially in the present day.

The reviews I have read about this book have been mixed. For the most part I agree with J. Caleb Mozzocco who wrote, "The premise is a solid, grabby and compelling one…but the timing couldn’t possibly be worse." Roy Boyd liked it well enough but called it "an odd little book." James Kniseley was more damning of it and wrote that the ending is "a hot mess that is anti-climatic and unclear."

Mechaboys was published by Top Shelf, and they have a preview and more information about it here. It features some profanity and violence, so it is recommended for readers mature enough to handle those matters. 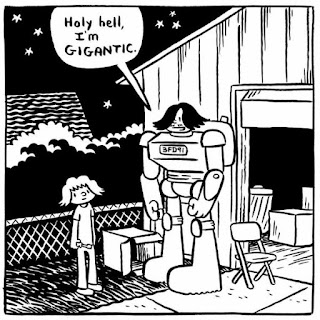