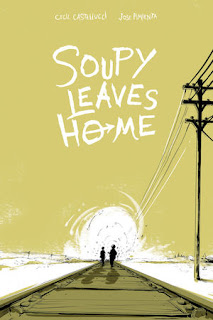 For the next couple of weeks, I will be reviewing books that have been nominated for the Excellence in Graphic Literature Award in the Middle Grades category. First up, Soupy Leaves Home is the tale of a girl named Pearl set in Great Depression-era United States. Her father is abusive, and finding no recourse she runs away from home. Not really knowing what she is doing, she disguises herself as a boy and falls in with a hobo named Ramshackle. 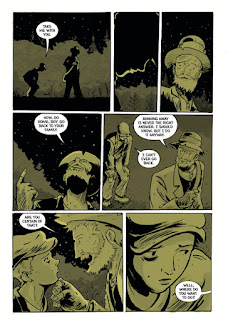 Together the duo look out for each other and tramp all over the country. Along the way, Pearl takes on the name Soupy, and she learns to take care of herself, deal with with railroad bulls, navigate the complex system of hobo life, and also read the signs left by others. Still, as much as they get to know each other, both Soupy and Ramshackle keep important secrets from each other.

I felt that overall, this book was a well crafted piece of historical fiction, with likeable characters and a few parallel plots that tied together well. Probably the strongest part of the book is the characterizations, with Soupy and Ramshackle really standing out. I especially liked spending time with Soupy as she grew and became more confident and capable over time. I do not really want to spoil much, by the end of the book, there are multiple revelations about the main characters, some happy and some sad, with lots of provocative thinking about social class, gender, and gender roles. And none of it is as stuffy as I just made it sound.

This book was a collaboration between writer Cecil Castellucci and artist Jose Pimienta. Castellucci is a prolific writer with many books to her credit, including YA novels and comics like The Plain Janes and Shade the Changing Girl. Pimienta has drawn a number of other comics, and his best known work is probably The Leg, a kooky piece of historical fiction starring Santa Anna's amputated leg(!). Castelluci speaks more about her work on this book in this interview.

All of the reviews I have read about this book have been positive. In a starred review, Kirkus Reviews summed up, "A compelling graphic offering that explores relevant gender roles and self-identity through a historical lens." Stephanie Cooke wrote that it's "a book that will resonate in everyone’s heart and you’ll be happy that you checked it out." And I agree strongly with Eric Kallenborn's observation that "the last act of the book is powerful and emotive."

Soupy Leaves Home was published by Dark Horse, and they offer a preview and more information about it here.
Posted by Stergios Botzakis at 12:00 PM