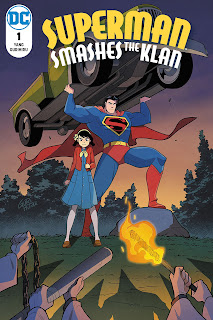 I usually don't review monthly periodicals here, but in this case I'll make an exception. For one reason, it's a larger than usual issue, and second it's written by Gene Luen Yang, former National Ambassador for Young People's Literature. Superman Smashes the Klan is a comics series based on a series from The Adventures of Superman radio serial based on a real story. The story is set in 1946 and follows the Lee family, who are Chinese and Chinese-American and moving to Metropolis from Chinatown. As they are settling into their new environs, they encounter prejudice both subtly (from neighbors) and extremely visibly from the local chapter of the Clan of the Fiery Cross (a thinly veiled Ku Klux Klan). As the Lees live across the street from cub reporter Jimmy Olsen, their situation comes to the attention of star reporters Clark Kent and Lois Lane. And of course, Superman also intervenes.

Notably, in this story Superman recounts the tale of how he began to learn about his Kryptonian roots and encounters the substance Kryptonite for the first time. So in a clever way, Superman's immigrant status comes to bear in fantastical terms on the more terrestrial concerns of the main narrative.

Although this tale is fictional, and it contains its share of superhero tropes, it is the very human and insightful supporting characters who steal the show. The Lees are a collection of distinct individuals: the mother clinging to her old ways and wanting to speak Mandarin, the father trying his best to do right by his family but also assimilate into US culture, the headstrong older son Tommy tries to use his athletic ability to win friends, while younger sister Roberta is more tentative and suspicious. I enjoyed getting to know them in short order, and it is easy to be moved by the events that envelop them. And I also find it fascinating to see a tale originally told in 1946 is still sadly relevant and applicable to events of today. 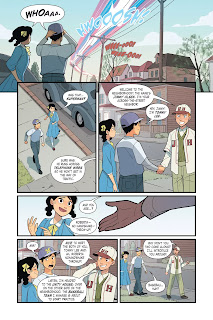 This book's author Gene Leun Yang is one of the premier comics creators working today. He was awarded a MacArthur Fellowship and has also won the Printz Award for his graphic novel American Born Chinese. He has explored themes of immigration, belief, identity, and growing up in his many works, including The Eternal Smile, Level Up, The Shadow Hero, the twin volumes Boxers & Saints, and New Superman. It was drawn by Gurihiru, a duo of Japanese artists named Chifuyu Sasaki and Naoko Kawano who have been drawing lots of American comic books over the past decade. Most of their notable works have been for Marvel Comics, but they also have drawn a number of books in the Avatar series. Their style is clean and crisp, telling the story and introducing the characters in vibrant fashion. Yang speaks more about the inspirations behind this series in this interview.

All of the reviews I have read about this book have been glowing. Ray Goldfield called it "one of the most engaging first issues that I can remember out of DC, and I expect that the final product is going to be a modern classic." Alexander Cole wrote, "It does a fantastic job adapting the historic radio drama that helped destroy the reputation of the Ku Klux Klan in America and it’s as heartfelt and entertaining as a comic can really be." Lizzy Garcia opined that it is "an excellent Superman story and a reminder of why I adore the character so much." My pal Paul Lai also has some insightful things to say about it in his podcast.

Superman Smashes the Klan #1 was published by DC Comics, and they offer more info about it here. There will be three issues in the series.
Posted by Stergios Botzakis at 12:00 PM